Gotham mixes in a little more camp into its gritty world as it finally puts Ed Nygma in the spotlight as he goes against Gordon with the use of elaborate performance art crimes designed to set Gordon up to a crime he did not commit. But as much as the hour features Nygma’s prowess as a criminal, it is ultimately Gordon who has to face off with himself and the crime he actually did commit: The murder of Galavan.

The murder of Galavan had been weighing heavily over Gordon’s head in recent episodes causing him to lie to Lee as well as Captain Barnes about what he had done. Gotham has been playing into the theme of Gordon being corrupted by the city and had him evolve into darkness, sacrificing his morals in the process, and it’s interesting to see how the show has taken Gordon into the direction of having to answer for his misconduct with such severe consequences. When Gordon killed Galavan it showed that he had crossed the line and it appears that Gordon’s journey this season will be about him paying for it and possibly finding his way back, but it will be a rough road ahead for Gordon considering all that he’s lost so far.

The genius of Nygma’s plan to setup Gordon comes with understanding how bullheaded Gordon would be, that he would never admit to killing Galavan, that he would continue to deny it even when faced with a crime that he didn’t do. “Mad Grey Dawn” perfectly displays how far Gordon has fallen in the scene with Captain Barnes in the interrogation room when he barks to Gordon to admit what he’d done, but Gordon looks away ashamed unable to give any answer and resorts to the same plea of a guilty man; requesting to talk to his rep. Gordon may not have committed the crime he’s being accused of but he is guilty of something and Barnes knows it. Ben McKenzie performance as Gordon displaying a range of shame and disbelief, as he faces the heartbroken fatherly Barnes played by Michael Chiklis, who embodies the angrily righteous good cop perfectly.

The other side of Gordon’s tragic downfall is presented with the future that he may no longer have with Lee and his unborn child due to his being so far from innocent. The onscreen coupling of McKenzie and Morena Baccarin has been one of the more engaging aspects of the show. Whenever there are scenes with just the two of them, it’s great to watch how they pull information out of the other, such as when Lee probes Gordon about what has him preoccupied and revealing that it’s not the current case at hand but being put under investigation by internal affairs. Their final scene in the episode together, where Gordon tells her to move on without him, is heartbreaking. Gordon has lost hope of being with his family, the respect of the GCPD, and his freedom.

“Mad Grey Dawn” makes Nygma a formidable opponent using a bit of a campy setup, a bit of gritty plotting, but most of all the facts of Gordon’s own crossing the line creating an entertaining hour that solidifies his downfall. 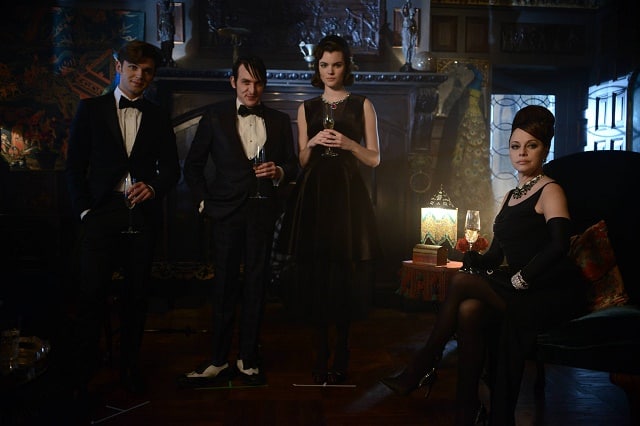 Bruce Wayne takes to the inner-city streets of Gotham without safety of his wealth or guardian, in order to test himself as well as to see the corruption of the city upfront. For this journey Bruce has teamed with Cat, whose snide comments and street smart will help him survive. It’s always great to have Bruce and Cat together on screen as David Mazouz and Camren Bicondova know their characters very well and display the relationship of Bruce and Cat with convincing depth. The duo are made a trio in this episode though with the inclusion of Ivy Pepper, who has been kept in employ cultivating illegal mushrooms for Sonny Gilzean as his crew. Clare Foley often gives Ivy the right level of creepy and dark humor delivery that really plays well onscreen, it would be nice to have her be a regular fixture during Bruce’s time in the inner-city. The plot that Bruce is given in this episode isn’t the best, but there are a few moments in that make it worthwhile and that is when Bruce puts to use a lesson that he learned from Alfred about taking a beating from Sonny which leads to his epiphany about being able to rise above the pain.

After being released from Arkham Asylum fully rehabilitated it has made the Penguin a man without a home, as his denouncement of violence has also taken away his drive. No longer wishing to be the King of Gotham he reconciles with Butch, whom he has mistreated greatly in the past. It’s a remarkable moment and indicative of the kind of crime boss Butch is that he takes mercy on the Penguin even after everything that he’s done. It’s fascinating to see the parallel of Gordon and the Penguin as they both transition from the light to dark and vice versus and both seem to be losing everything. Penguin had lost his power to Butch, then he loses Nygma’s friendship by condemning violence but where he finds hope and salvation is by visiting the last person who was emblematic of his humanity and that is at his mother’s grave. There is where he finds his true father Elijah Van Dahl, played masterfully by Paul Reubens. Penguin appears to be on the opposite trajectory as Gordon as now Penguin gains a family where Gordon is losing his. But the family that Penguin is joining appears to be suspect as their glances to one another show dismay at the new addition to their flock, which promises that maybe Penguin will gain his edge again after some familial prompting. 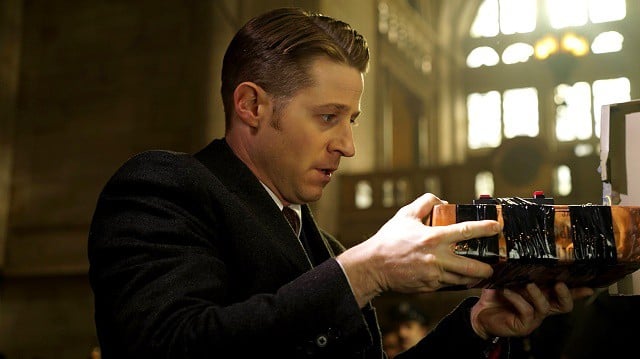 The investigation this week takes Gordon and company on the lookout for a brain teasing criminal who appears to want to play explosively deadly games with the GCPD. The very premise of this is very familiar and draws more from the original Batman 1966 campy television series than it does the average cop procedural, but as Gotham has done time and time again, it takes these kitsch ideas and make them much more grim. From the opening sequence at an art show displaying a piece that is titled “This is a real bomb” that is set off in order to clear out the room while Nygma defiles a message to be solved, we are clearly in a more playful territory. Gordon’s study of the crime scene is equally as playful such as when he asks the art show coordinator if there is any connections between the tarnished paintings, who suggests that there are countless ways to draw connections, which Gordon brushes off by concluding that the answer has to be simple, realizing the names are to an address where the real bomb would be.

The question mark spray painting is a calling card for the Riddler, something that Nygma is employing under the guise of the Mad Bomber which is giving a nod to that aspect of the character, which is fun to see. Gotham typically sidelines Nygma, simply evolving his character steadily within subplots. It is here that we get to see the full extent of Nygma’s capability and it is particularly good, that takes into consideration how well he knows Gordon and how to manipulate him. Although the cause for Nygma to face off with Gordon is a bit clunky, that he finds himself again being questioned about Ms. Kringle after the issue had subsided is a bit of a stretch, but it still brought Nygma to the forefront in a spotlight episode for him that will be exciting to see what is next for the villain, now that he’s solved his Gordon dilemma.

Robert Hull scripts “Mad Grey Dawn” on his second Gotham outing since “Mommy’s Little Monster”. Hull doesn’t get too muddled in exposition beats making Gordons downward spiral as orchestrated by Nygma work well even as a standalone. The narrative flows well and gives each character their due with dialogue that are often poignant. Nick Copus returns to direct following his most recent episode “Mr. Freeze”. Copus handles the campy elements of the crime well, never allowing the tone to slide too far from where Gotham has tread, remaining the gritty deaths and crime scenes remain authentically grim. The production design of the art exhibit is particularly on point, and the effect of the fake bomb is beautifully realized, as well as the real bomb that Gordon is able to dispose of with no casualties. The sequence where Bruce gets a beating from Sonny is also pretty brutal and the makeup effects on Bruce while Cat stitches him up are also well done.

See also  Gotham, Ep. 2.16, “Prisoners” beats Gordon down so he can rise again