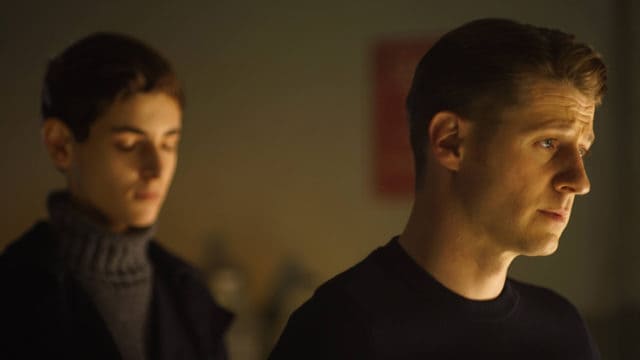 Gotham’s second season finale brings all that came before together in a fun and exciting hour that sets off a new chain of events that are certain to make the upcoming season as much of a thrill ride as this season has been, if not more so.

Gordon’s heroic journey has been filled with despair and tragedy, which has been mostly his own doing. This season Gordon has been corrupted by Gotham City so much so that he has crossed the line from hero to straight out murderer. While Gordon’s path has been dark it has been an interesting one, of a man who has lost himself in trying to find justice in a system where it seemed impossible. While Gotham could’ve simply been about a man who is a clear cut unflappable hero, one who always does what is right and always catches the villain, that is not the show that Gotham is and it’s much better for it. Gordon is a very complicated character that straddles the line of right and wrong and this season he has fallen quite hard to the other side and is fighting now to get back to right side again. Gordon has been on the road to redemption which he, at first, believed involved that he made good on the promise that he made to Bruce to find the Wayne Murderers. What Gordon learns in “Transference” is that it really isn’t the way.

The beautiful and exciting thing that Gotham has done with Gordon’s arc is that it shows him learning and changing for the better. He is not just sticking to his old habits and making more of the same mistakes. With the help of Professor Strange he realizes that it was his endless obsession that was keeping him from returning to Lee. Professor Strange has saved Gordon from Gotham City, all while also being the cause of its next evolutionary step in criminality. Professor Strange absolves Gordon of his sins in an existential sequence that is visually outstanding as it is emotionally powerful. Gordon enters a new phase in his life that gives him an exhilarating new drive and a priority to try to mend his relationship with Lee. While Gordon’s new energy is refreshing it’s important to remember that this is Gotham and that Gordon’s path will certainly be darkened again as he is destined to become the Commissioner of the GCPD one day.

While Gordon takes a turn towards a lighter path, the opposite is true for Bruce. As pure as Bruce is at the beginning of the series he is also struggling with his own demons and his own battle with his obsession. Bruce is a steadfast hero on this series and there is a lot more riding on his characterization maintaining his purity, but the one thing that is allowed for his journey is the extant of Bruce’s obsession with solving the murder of his parents, which has been an interesting ride that is becoming more and more exciting as more layers of the world of Gotham is becoming revealed. The secret council is now in Bruce’s radar and the more he learns about Gotham City’s deep seeded secrets the more obsessed with fighting the corruption of the city he will become. It’s the story Gotham is made to tell and it’s a story that is developing very well and entertainingly so.

Gotham has been a show that has become well known for its off kilter colorful villains and it’s unique flair to balance a tone of grim horror and gritty dark humor, and “Transference” not only makes a case for how truly interesting the heroes on the show are but also presents the perfect balance of all the tones the show is capable of. It has horror, humor, action, rich characters, and a developing mystery that promises to make the next season a truly exciting experience. 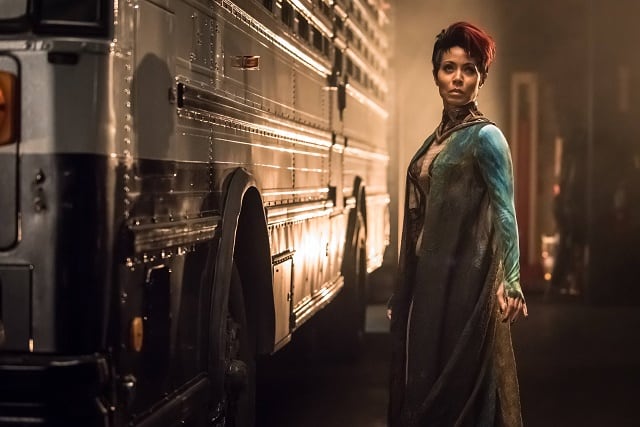 Fish Mooney is possibly the best of the old guard of villain and the new power infused criminal rolled into one. While in this episode she is made to appear somewhat ineffective at times, she is a feisty enough character that will make for a fun presence to see appear again every once in a while. Jada Pinkett-Smith continues to deliver a dynamite performance that can draw out the desire to cheer whenever she utilizes any one of her signature moves, such as her finger wagging while clicking her tongue and her intense frustrated yells. Her interactions with Ms. Peabody(Tonya Perkins) is one of the best face-offs in the episode. It’s so wonderful to see these two playoff of each other.

We get to see a little of Selina “Cat” Kyle is the-smartest-person-in-the-room action play out while Bruce and Company just sit on their hands accepting that they are about to meet their doom. While it’s fun to see Bruce underestimate Cat and think that he has manipulated her to doing his will (As if!), it does make Bruce seem a little ineffective as he had very little to do with their escape. Camren Bicondova continues to portray Cat with an attitude that is both charming and amiable while sharing incredibly compelling chemistry between her and David Mazouz, who is always excellent at displaying all facets of Bruce Wayne. 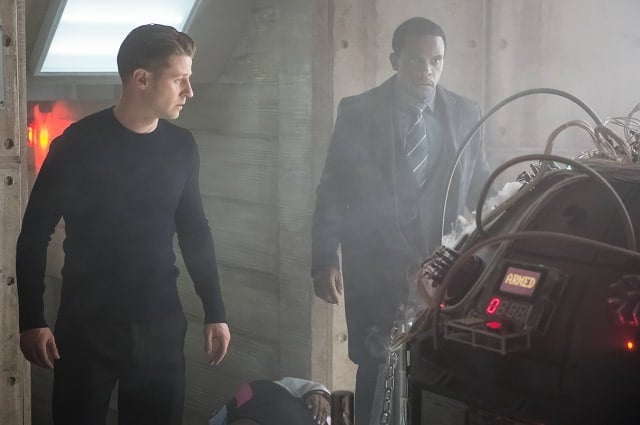 With the momentum of last week’s episode prompting the GCPD to storm the castle that is Arkham Asylum it seems assured that the battle would be won without a hitch, but a diversion is set into play to ward them off, while Professor Strange prepares for the dismantling and rehousing of Indian Hill. That diversion being a Gordon decoy in the form of Clayface. This is actually a really fun postponement of action with a really entertaining performance from Ben McKenzie as someone pretending to be Gordon but is clearly not him. It’s great to see McKenzie essentially parody his own portrayal by tweaking his usually tempered gritty voice to even more extreme comical effect. McKenzie gives a truly hilarious performance as Clayface/Gordon which just shows how much range he has especially considering how much pathos his characterization of Gordon has on a regular basis.

While the GCPD are distracted Professor Strange interrogates both Gordon and Bruce about what they know, if anything, about the secret council. The Gordon and Professor Strange sequence is particularly well crafted both visually and in the writing as Professor Strange appears to be actually attempting to help Gordon come to terms with his obsession. Even though Professor Strange’s plans are to dispose of Gordon after he finds out what he needs to know from him it’s interesting to see how Strange uses psychology to conjure the answer from Gordon. Professor Strange is a fascinating villain in many aspects as he genuinely seems interested in the psychology of all his subjects and has an innate desire to improve them; while his idea of improving may differ from normal standards, he is portrayed with a curious scientific mind that is unrestrained by a moral compass. BD Wong brings so many layers to his performance that reaches levels of camp but then also transcends into powerful universal emotional truths. Gotham is an excellent playground for great actors to display great performances and BD Wong is most certainly one of the best to come across the screen yet.

“Transference” is written by series showrunner Bruno Heller, who proves again why he is the one running the show as his script perfectly encapsulates the best of the series through line, and services the plot turns that drives the show to its greatness with great skill. Directed by Eagle Egilsson, another of Gotham’s best contributors, the visual flourishes in the episode such as in the excellent Professor Strange and Gordon interrogation scene and in Bruce’s knock out gas scene really stand out and make the episode not only compelling but also very rewatchable. The Gotham team never fails to at the very least present an episode that is flashy and beautiful to look at.