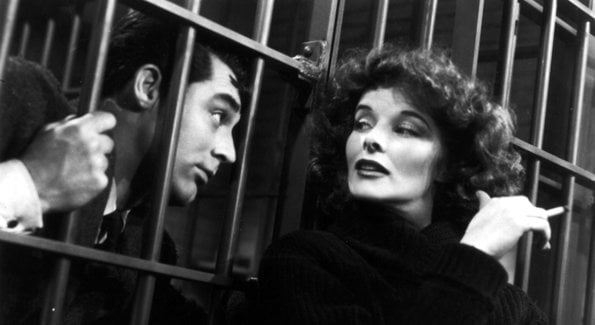 Taken out of context, it seems like Bringing Up Baby should have been a blockbuster in its day. It had all of the necessary elements: big name stars playing unique characters, a wacky plot, hilarious dialogue and a large handful of plot twists – but when the movie premiered in 1938, it bombed. Director Howard Hawks was fired from his next film and leading lady Katharine Hepburn was forced to buy out her contract. Hawks has reportedly said that the failure was due to too many zany characters without any straight men or women to ground them, but most critics agree that this screwball comedy was the first of its kind, and too sophisticated for its 1930’s audience. The film continues to build revenue for Hepburn’s estate and is regarded as one of Hawks’ best films.

The story takes many twists and turns, but it essentially revolves around three individuals: Dr. David Huxley, a mild-mannered paleontologist, Susan Vance, a klutzy socialite with an odd sense of logic, and Baby, a tame leopard sent from Susan’s brother in South America. David and Susan meet on a golf course while David is trying to convince the lawyer of the wealthy Mrs. Random to donate one million dollars to his museum. Susan and David have a few hilarious run-ins before Susan convinces David, who she thinks is a zoologist, to come down to her Connecticut summer home to take care of Baby. There, he finds out that Mrs. Random is Susan’s aunt, Susan’s dog steals a valuable Brontosaurus bone from David, and they end up on a hunt for Baby where they run into a man-eating leopard that just escaped from a circus. Inevitably, they all end up in jail. Susan, however, is able to make her escape, bringing back both leopards to the police station long after everything has been cleared up. The movie closes on Susan crashing down on David’s Brontosaurus skeleton and David subsequently embracing his bride-to-be.

Although Katharine Hepburn’s Susan Vance is undoubtedly the most unique character in the movie as well as the one that drives the insane plot along, it is Cary Grant’s performance that new audiences may appreciate the most. Seen primarily as a handsome, straight-laced leading man, Bringing Up Baby portrays Grant’s completely innate comedic genius in its brightest form. Although he didn’t use a stunt double for any of the physical antics he performed in the film, he was not at all comfortable around Baby the leopard. A double was used for his scenes with the animal and the end results are hardly noticeable (many technical break-throughs, such as double-layering shots, are used in this movie). Grant had his start in English vaudeville and then light Broadway comedies before he made it all the way to Hollywood. One of the most talked-about moments in cinema history all started with an ad-lib of his: in the scene where he’s dressed in Susan Vance’s frilly pink bathrobe (she had disposed of his clothes to keep him around longer), he encounters Mrs. Random, who asks why on earth he’s dressed like that, and after a lot of stammering he jumps up and exclaims, “I just went gay all of a sudden!” Many critics agree that this may have been the first time the word ‘gay’ was used to mean homosexual in a non-pornographic setting, at least thirty years before the general public came to associate it as something different from its archaic meaning of joyful or happy, occurring during the Stonewall riots. This coincides with persistent murmurs of Grant’s alleged bisexuality.

The historical significance and light-hearted hilarity of Bringing Up Baby makes it essential viewing for any movie-lover. It’s rated #14 on AFI’s list of the top 100 comedies of all time, and many modern comedic actors cite it as one of their all-time favorites. If the concept of Katharine Hepburn and Cary Grant chasing around a leopard as well as each other for forty-five minutes doesn’t intrigue you, I don’t know what will.