In case you didn’t know, the last Harry Potter film is coming out on July 15th.  In  countdown to Harry Potter and the Deathly Hallows: Part 2, I will be doing a twice-weekly series called “Harry Potter as Cinema”, starting with the first film in the series and working my way up to the final film.  I will take an academic approach to the Harry Potter films as pieces of cinema, examining not only their quality but also what they are saying thematically. 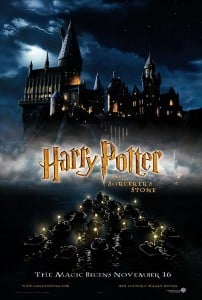 Harry Potter and the Sorcerer’s Stone

Looking at a film like Harry Potter and the Sorcerer’s Stone is tricky because there are multiple ways of viewing it.  Someone could look at it as a faithful adaptation of long book.  Yet another person could still say that it is a soulless and lifeless adaptation.  In order to look at it fairly, you have to re-read J.K. Rowling’s book. While the Harry Potter series is terrific, the first book doesn’t really hold up that well. By that token, one could say that Chris Columbus’ film is a decent adaptation of a decent book.

Still, as a film onto itself, it does not hold up particularly well, especially when compared to the later entries in the series.  To paraphrase Mark Twain, the film knows the words but not the music.  Columbus faithfully recreates all the major events in Rowling’s first book but he doesn’t get the tone right.  Instead, it just feels like an empty recreation with some nifty special effects.  It’s as if he and screenwriter Steve Kloves are just trying to cram in everything they can into a greatest hits compilation.  This will please fans but turn off cinephiles.  The film is devoid of any personality of its own, likely because Chris Columbus is not the right director for this material.  Rowling originally wanted Terry Gilliam; instead, Warner Bros chose to play it safe and hand it over to the family friendly Columbus.  Gilliam famously called the Columbus films “shite,” a telling sign that Gilliam’s vision would have been a lot darker. 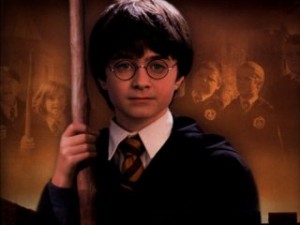 While Gilliam is a good choice, I think this film needed Guillermo Del Toro or Alfonso Cuaron, who directed the third film, which was a game-changer in the series.  Del Toro in particular has shown to have a good balance of the dark and whimsy; his Hellboy films are a prime example of that.  Columbus is best when working on a small scale but he can’t do dark and creepy.  He also can’t direct action, which is a big problem when you reach the final set piece.

However the biggest problem with this film is that it treats the material in a joking way that comes off as condescending.  Columbus and Kloves do not invest the film with any gravitas, instead choosing to wink at us.  The violence in the film is played for laughs and it’s as if they do not trust the kids’ intelligence.  There are no consequences.  We never feel like any of these kids are in danger.

Columbus is also not very good with actors.  As Hermione, Emma Watson is extremely annoying, while Rupert Grint makes Ron out to be an idiot.  The startling contrast in their performances, especially Watson’s, in the later films just goes to show you how badly Columbus directed them.  However the adult actors are not much better.  Alan Rickman as Snape seems to be playing a parody of himself, his performance bordering on Timothy Dalton in Hot Fuzz levels of ridiculousness.  Richard Harris is phoning it in for a paycheck as Dumbledore.

Still, there is some good stuff here.  Daniel Radcliffe gives the best performance in the film as Potter himself.  He manages to bring some heft to the material and is leagues above any of the other child actors.  Maggie Smith does nice work as McGonagall.  The f/x are pretty good, especially during the Quidditch sequence.

As a piece of cinema, the film is pretty lifeless.  It feels like it was put together by a hack because it has no real personality of its own.  There are no memorable shots or sequences.  Instead of doing a line-by-line adaptation, they should have pared down the book and focused on getting the tone right.  After all, the lyrics are not the problem here.