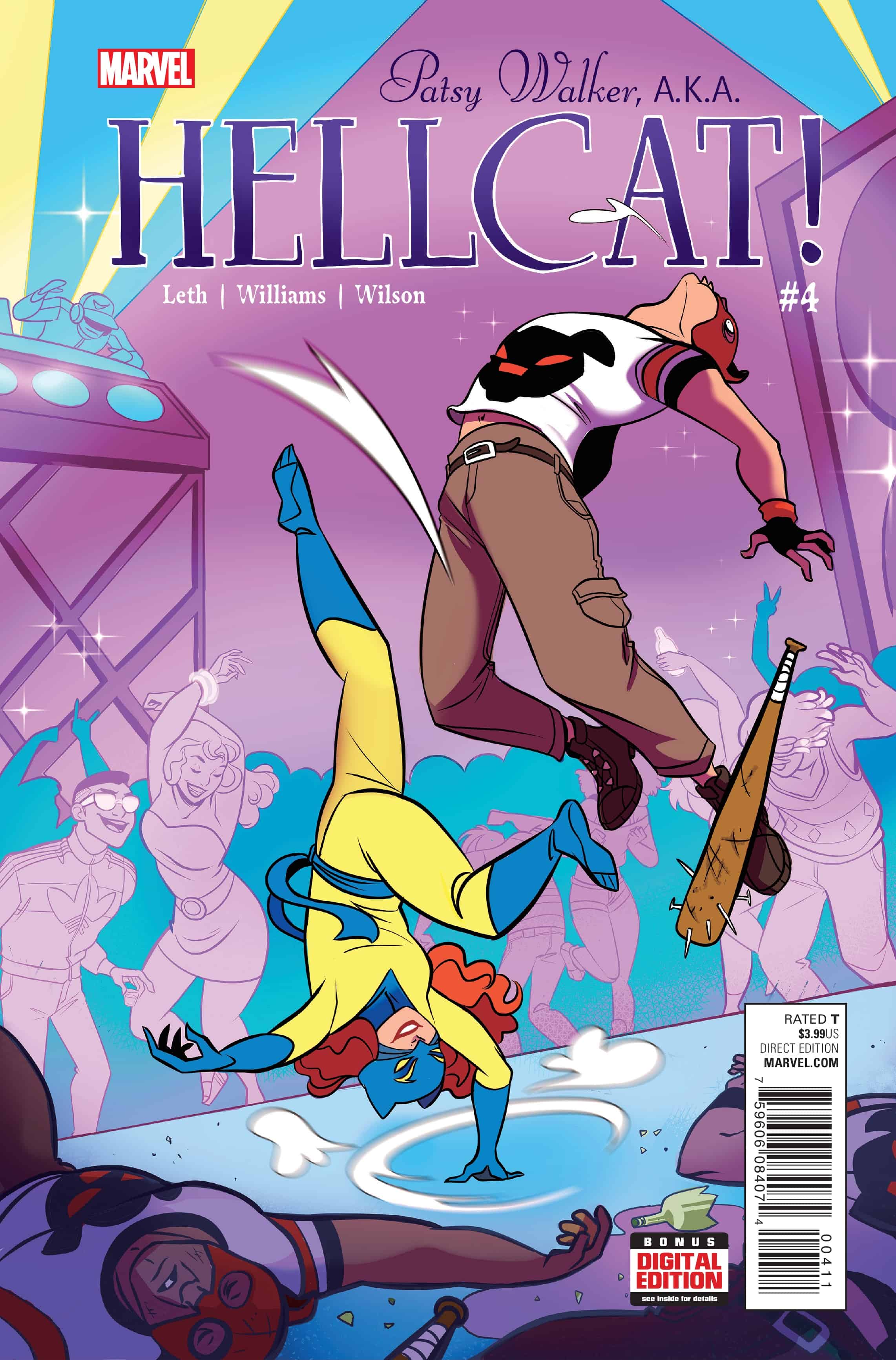 In Hellcat #4, our protagonist Patsy Walker finds a new job working the front desk at Tara Tam’s (BFF of Howard the Duck and the nicest Skrull on the block) tattoo parlor while writer Kate Leth and artist Brittney Williams finally give readers a look at the first arc’s not so Big Bad, Casiolena. She’s an Enchantress knock-off (and referred to as such in Leth’s script), who Patsy previously tussled with in Defenders long ago. But despite her less than stellar power level, Leth positions her as a foil to Patsy, who is trying to set up a temp agency as she gets young, down on their luck Inhumans and mutants to do her dirty work in return for power, money, or in the funniest and saddest line of the issue, repayment on their student loans. But the real suspense in this issue comes from the battle over the rights to the comic book starring Patsy Walker, which are being held by her former best friend Hedy Wolfe. Time management and deadlines are a much scarier foe than some D-list supervillain.

There are some new faces in Hellcat #4 in Howard the Duck and Tara, and artist Brittney Williams incorporate them nicely in her art style. She gives Tara a super cute sense of style with a leopard print capri/belt combo while Howard gets to be a silly source of physical comedy and exposition running all over the store like he owns the place. As for Casiolena and her minions, Williams goes a little Walt Simonson with the character designs while keeping her cartoonish style, and colorist Megan Wilson adds plenty of golds, greens, and browns to give her Roosevelt Island lair a wannabe Asgardian feel borrowing from the usual palettes of Loki and the Enchantress. She turns the yellows 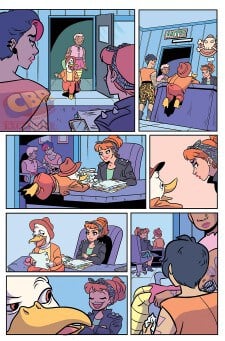 up to eleven once Valkyrie and Hellcat team up against Casiolena towards the end of the issue before bringing the issue to the mortal realm as Patsy forgets her appointment with her lawyer, She-Hulk, even though her phone has rung quite a few times during the superhero team-up.

And one of the most refreshing parts of Hellcat #4 and honestly the series as a whole is the organic nature of Patsy’s friendships with the various superpowered (or just normal folks like Tom Hale) denizens of her world. From her bonding with Tara and learning about the terribleness of Tinder while getting an impulse tattoo of chibi Hellcat to setting up a team-up with Valkyrie via text message, Patsy truly values her friends, and this caring nature extends to the young superhumans of New York, who are getting ripped off by Casiolena. Casiolena is a nefarious snake oil saleswoman and job recruiter, who dresses like a Renaissance fair cosplayer and should probably work for Monster.com while Patsy just wants her fellow superpowered people to have good jobs and lives. But she’s not a magic job or money fairy and could have problems of her own with the whole Hedy situation.

Hellcat #4 continues to be an adorable, friendship focused comic about characters, who struggle with real problems like dating and jobs along with fighting Asgardian sorceresses. And artist Brittney Williams and colorist Megan Wilson add some nice Bronze Age flourishes when Casiolena shows up to pay homage to Patsy’s adventures with the Defenders in the 1970s and go with their fashion forward character designs and fun cartooning and to vary the style of the comic a little bit.