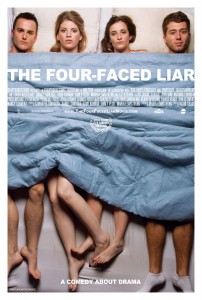 The Four Faced Liar is smart romantic comedy that follows the lives of four young people in New York City. Molly and Greg are a couple and Trip and Bridget who is gay are old friends. When Bridget and Molly meet, they instantly have a connection that soon becomes stronger and stronger. This film is by all means a fairly standard romantic comedy not unlike Imagine Me & You from 2005 which has a very similar plot. While the film does not necessarily explore anything too out there or new, it is nevertheless a fun rom com. If this was starring more famous faces (although Todd Kubrak who plays Trip does bear a striking resemblance to Edward Norton), it’s not hard to imagine it as a Hollywood blockbuster. That said, the actors, especially the main four were extremely well-cast and played off each other very well. 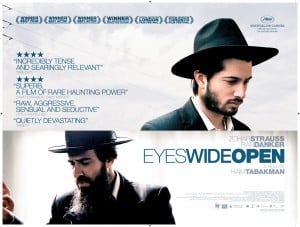 Eyes Wide Open is not a comedy. Or is it? The story is of Aaron, a Jewish butcher from Jerusalem whose life completely changes when he takes in a young drifter named Ezri. He quickly develops feelings for him that he shouldn’t. When he gives into those feelings everything around him crumbles as the forbidden relationship continues. What sounds like a forbidden love story is actually a quite interesting look at life in ultra-religious communities like Aaron’s Jewish one. Shot in Jerusalem and only taking place in a handful of locations, the film is quite dreary in terms of cinematography and colour palette. Whether intentional or not, there is something heavy and almost opressive about it.  This worked very well and makes sense for a film with this particular subject matter. Imagine my surprise then when it turns out that from all the films I’ve seen so far, this film got perhaps the most laughs from its audience. Sure, some of the lines and jokes and even some shots were incredibly funny but I just couldn’t help but think they came way out of left field. While I have no problem with a little comedic relief, I’m not sure it was handled as well as it could have been in this movie and at times I felt like I was watching scenes from a different movie, a comedy about the same subject, spliced in-between the very serious subject matter of Eyes Wide Open. While some of the jokes did have me laughing out loud, I wish the film had made up its mind a little bit.

Continuing with the trend of “ gay and Jewish”, the second movie of the night was Oy Vey! My Son is Gay. 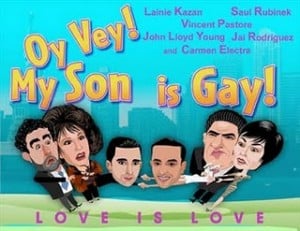 Besides the fact that its title is one of the funniest film titles I can think of, it’s also very apt. Rather than focus on too much on the titular gay son, Nelson, for the most part the movie instead revolves around his parents, who as the title suggest find it hard to digest the news that their son is gay. Saul Rubinek as Nelson’s father, Martin, is especially entertaining in a role not unlike the one he plays in another recent release, the Canadian comedy The Trotsky. There, he plays the disapproving father to Jay Baruchel’s would-be Leon Trotsky, here he plays the disapproving father to John Lloyd Young’s as his gay son. Both times, he plays it just the right way. Besides gay, Nelson, as the title again suggests, is also Jewish which adds another layer of comedy. Everything put together, this is an absolutely hilarious film, despite also having a good message about being allowed to love however you want. Although, I could have done without the sing-along at the end. And Carmen Electra maybe.


Prev Article Next Article
Tags:Eyes Wide Open, Gay and Lesbian Film, Inside Out 2010, Oy Vey! My Son is Gay., The Four Faced Liar