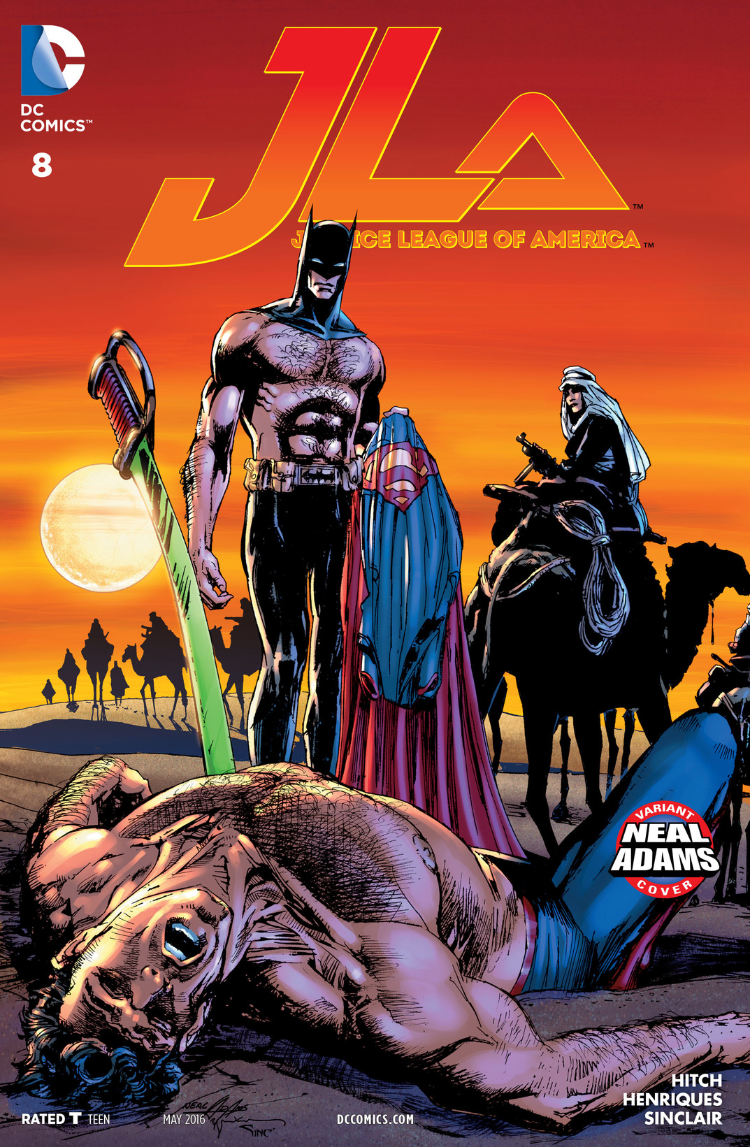 Issue #8 of Bryan Hitch’s Justice League of America  has arrived at a particularly eventful epoch for the titular Justice League, and whether by chance or design the contents of the issue are closely tied to the tumult.

Of first note, DC Comics this past week released numerous new details concerning their line-wide relaunch entitled Rebirth. Most significant of the various announcements was that Bryan Hitch would be replacing Geoff Johns as the writer of what has been the publisher’s premier series for the last four years, Justice League. Knowing such leads the reader to examine the writing on issue #8 with a far more critical eye, dissecting the dialogue, characterization, themes, and story structure not merely in themselves, but as a litmus for the quality one could expect of Hitch’s upcoming run on the main title. JLA had always come across as a vehicle for his art; while he was the sole writer for the series, his pencils’ nevertheless seemed his main contribution. But with Tony Daniels and Fernando Pasarin drawing Justice League, Hitch is making the rare transition from artist to writer. Given the middling quality of JLA and the failure of other superstar artists (such as Neil Adams and Rob Liefeld) to make as meaningful an impact on the industry after switching to story-telling, expectations for Justice League ought to have been tempered. Issue #8 will lower them still further. 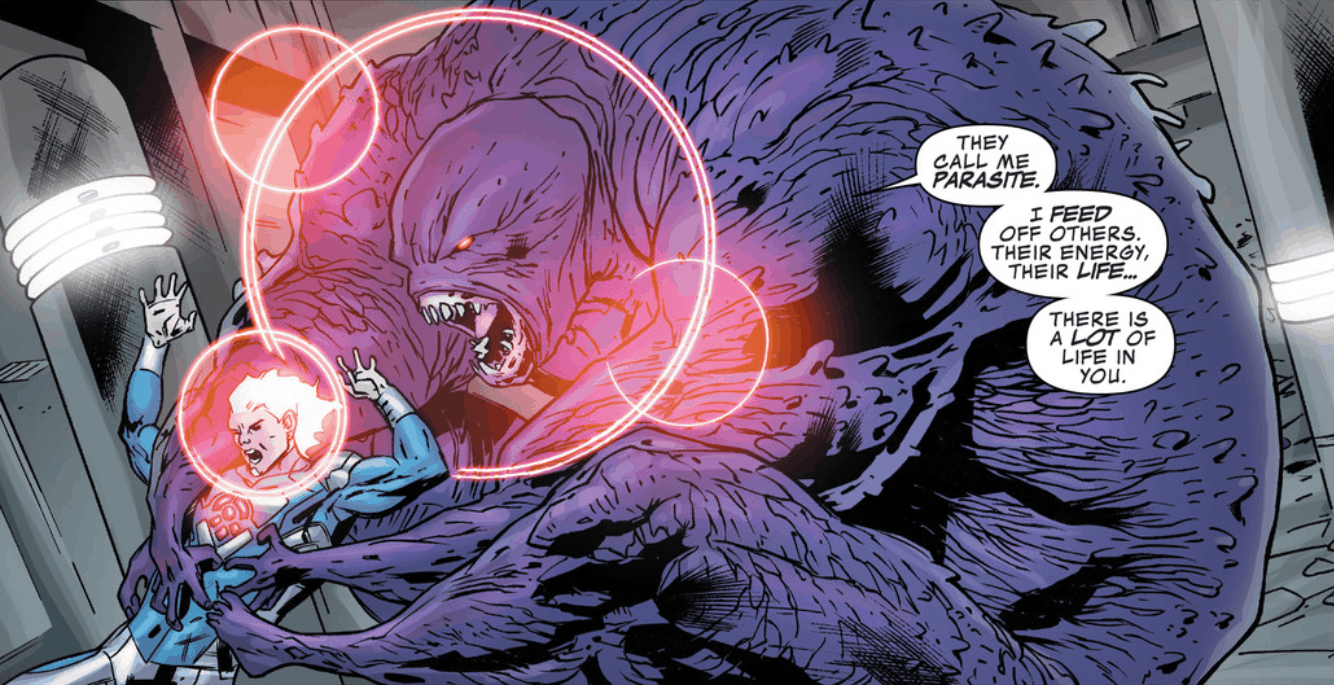 More obviously JLA has arrived mere days after the Justice League’s cinematic debut in Batman v Superman: Dawn of Justice (spoilers follow). Given the delays on the part of the comic, the timing is surely coincidental, but it’s nevertheless notable that in a span of seven days the character of Superman has died twice. Moreover, there is a strange symmetry in the foes he faced leading up to his demise. In Dawn of Justice it is satanic Doomsday, acting as the ancient adversary within the allegory of the film. As Luthor quotes tellingly, “If man will not kill God, the devil will do it.”

Inversely, in JLA it is through battle with the self-proclaimed god Rao that Superman expires. Such has been hinted at since issue #1. Given JLA’s place in continuity prior to The Villain’s Journey, it’s already assured that Superman will be resuscitated, resurrected, or otherwise revived. As such, his death here lacks shock and surprise, or anywhere close to the cultural impact of his ‘93 bout with Doomsday. Dawn of Justice killed the character partly as an allusion to that storyline, but mostly to fit the Christological motif which the movie constructs around the character. If there similarly exists a thematic reason as to why Hitch had Superman die in this story-arc, such is for future issues to reveal, as nothing within these pages sheds much light on the matter. 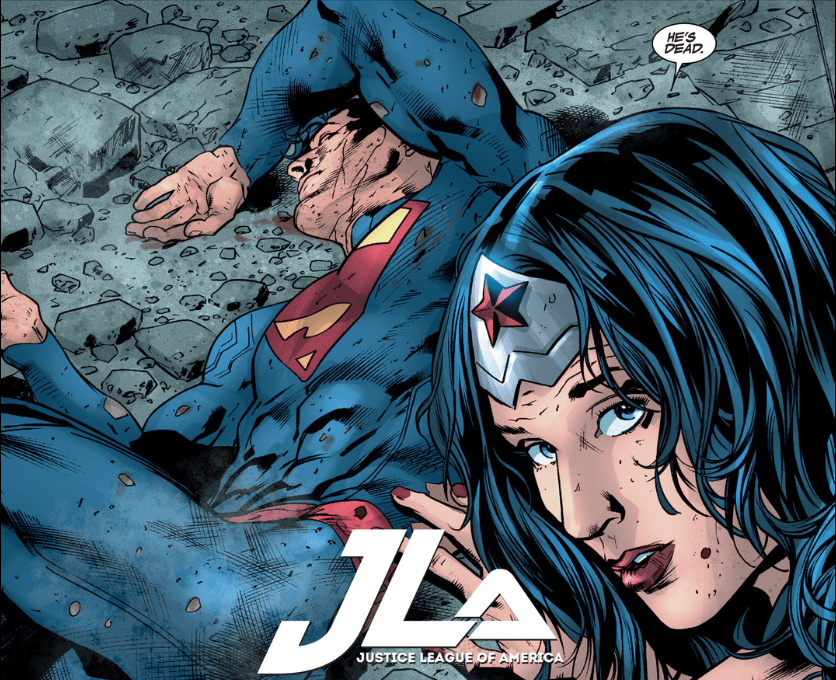 Such is hardly the damning critique it first seems. Issue #8 is the climatic action set-piece with more punches than plot points. While this makes for a less substantive story this issue, such is less problematic when viewing it in the context of the surrounding arc. In fact, Hitch ought to be commended for pulling off a proper time-travel story, with all the crucial elements of the climax previously set-up, such as the importance of the Parasite or the efficacy of defibrillation in disconnecting Rao from his followers. While that might seem obvious, far too many time-travel stories in comics make no attempt at such. Age of Ultron comes immediately to mind (undoubtedly due to it also having been drawn by Hitch), as does Battle of the Atom (which, like Ultron, was written by Bendis).

Nevertheless, while the plotting might be airtight, that doesn’t make the particular beats compelling, especially compared to more cerebral issues within this series and more entertaining action in other Justice League titles. Moreover, the dialogue is particularly cringe-worthy, with lines like “They call me Parasite. I feed off others. Their energy, their life. There is a lot of life in you,” indicative of the quality throughout.

Yet for as mediocre as the writing may be, it’s understandable that DC editorial would prefer for Hitch to write the Justice League instead of drawing them going forward. When given two to three months between issues, as he had on Ultimates and Ultimates 2, Hitch can prove himself one of the best artists in the industry. But when needlessly rushed (as it is here, considering JLA ties into no other on-goings), the quality sharply suffers. That DC editorial would not afford the artist a more accommodating schedule places the blame for JLA’s inferiority to the rest of Hitch’s portfolio squarely on the publisher’s shoulders. One particular panel depicts a Wonder Woman who more closely resembles Valiant’s plus-sized heroine Faith than an ageless Amazon of perfect pulchritude. It required a re-draw, but in the rush to maintain a regular schedule was allowed to pass muster. Such policies do not bode well considering the number of Rebirth titles announced as bi-monthly releases. Note to DC: the timeframe for a title’s release should always and only be “It’s ready when it’s ready.” It worked for Sandman Overture. More writers and artists might be able to rival Neil Gaiman and J.H. Willaims were they afforded the same courtesy. 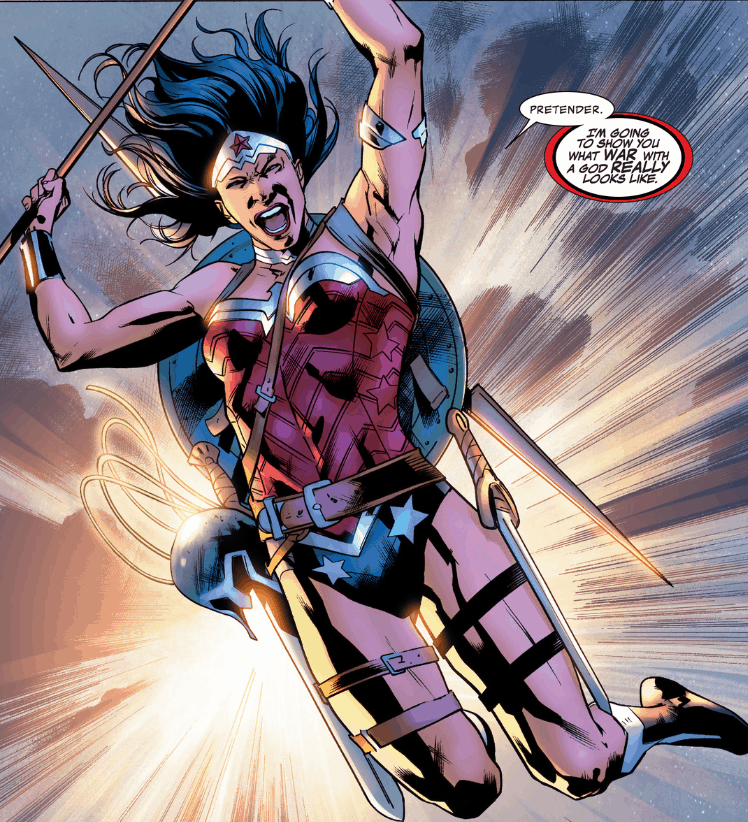 JLA #8 is a disappointment, even within the context of an underwhelming series which suffered high expectations given the pedigree of the talent attached. As such, it is a troubling portent of for the quality of DC’s marquee title come July’s Rebirth. One can only pray to Rao that Justice League doesn’t arrive stillborn.