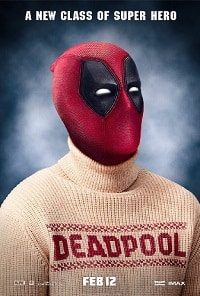 With the Marvel Cinematic Universe churning out mega-hits faster than the Oscars can offend people, the timing is perfect for a kick in the superhero shorts by Deadpool. First-time director Tim Miller does an admirable job bringing the belligerent anti-hero to life, with a huge assist from a super-motivated Ryan Reynolds. Though it feels like being locked in a bathroom with the ‘life of the party’ for two hours, there’s no resisting the inspired energy and vulgarity of Deadpool. You and your buddies will be quoting this one for years.

Whatever you do, don’t call Wade Wilson (Reynolds) a ‘hero.’ And if you really slip up and call him a ‘superhero,’ expect a swift reprisal to your nether regions. He took his turn as a hero back in the Special Forces, but now he makes his bones as a ruthless mercenary. “I’m just a bad guy who gets paid to f*** up worse guys,” he deadpans. Wade’s recklessness and staunch independence don’t exactly make him a candidate for longevity, which explains why his bartender buddy, Weasel (T.J. Miller), keeps betting on him to win the bar’s “Deadpool.”

That all changes when Wade meets Vanessa (Morena Baccarin). They fall in lust at first sight, have lots of gratuitous sex, and get engaged after barely a year together. Wade doesn’t trust these happy times to continue, and, sure enough, the other shoe drops in the form of terminal cancer. Desperate for a cure, he enrolls in a research program designed to activate his mutant genes. It works, but not without lots of pain and suffering, mostly at the hands of the sadistic Ajax (Ed Skrein). Disfigured and tormented by his mutant ability to heal (and be immortal, apparently), Wade adopts the masked persona of Deadpool in his quest to exact revenge on Ajax.

It’s hard to decide if Reynolds is channeling Jim Carrey as the Riddler, or Jim Carrey in The Mask. Either way, he is always “on” and always annoying. From an opening title sequence filled with bogus credits, including a directorial shout-out to ‘An Overpaid Tool,’ Deadpool is a non-stop barrage of wisecracks and butt cracks. If it tries any harder to be edgy and irreverent it’s liable to pull a groin. Luckily, the anarchic wit and propulsive energy keep the act from wearing too thin or becoming predictable.

Director Tim Miller also bucks predictably by creating all manner of visual chaos. He spins around the action, occasionally stopping to provide a slow-motion tea-bagging or bloody decapitation. Animated unicorns prance across the screen and a CGI Colossus (voiced by Stefan Kapicic) vomits in response to the graphic violence. Miller has a great feel for visual texture, but he struggles a bit with the action choreography. He uses rapid cuts in lieu of logical orientation, and relies far too heavily on special effects (some of which look sketchy at best). The action isn’t bad, exactly, but that’s not what Deadpool is about. This is a movie more concerned with verbal sparring than superhero brawling.

The real super-heroes of Deadpool, then, are screenwriters Rhett Reese and Paul Wernick. Their adaption of the Marvel creation is pitch-perfect, as they take the irreverent banter of Guardians of the Galaxy and give it an R-rated spin. The result is the most quotable movie in years. Sure, lots of the one-liners fall flat, but an astonishing number connect, and the undercurrent of nihilism makes even the groaners feel right at home.

Screenwriters tasked with future Marvel origin stories should also take notes on the structure of Reese and Wernick’s script. They employ an ingenious chronology that moves Deadpool back and forth in time; showing us the consequences of bad decisions and then moving backwards to see their justifications. It’s a brilliant solution to the ‘unlikeable hero’ conundrum posed by Deadpool (who is an irredeemable jerk), and it keeps things moving crisply, even when the exposition gets clunky in spots.

Like its acerbic hero, Deadpool does everything in its power to be obnoxious. That starts with the lead performance from Reynolds. It’s not a bad performance, really, as Reynolds carries the entire film with his unceasing energy, but he needs a gifted supporting cast to make him more palatable. It’s like trying to swallow a chocolate bar; the chocolate tastes good, but you need some milk to keep the edges from scraping on the way down. Luckily, his quirky co-stars are up to the task. T.J. Miller is terrific as the greasy Weasel, who delivers some of the most descriptive and hilarious lines regarding Wade’s deformed face. Also wonderful are Leslie Uggams as Deadpool’s blind, IKEA-obsessed roommate and Karan Soni as a genial cabbie who turns (tragically) to Deadpool for relationship advice. These are exactly the kinds of wacky characters you need to keep Reynolds from overstaying his hyperactive welcome.

Perhaps the biggest debate surrounding Deadpool will focus on its unabashed self-awareness. Purists may tire of Deadpool’s fourth wall shenanigans, as he makes direct references to other characters and actors in the X-Men universe (Hugh Jackman gets lots of love). When Colossus informs him they are going to see Dr. Xavier, Deadpool asks the logical question, “Stewart or McAvoy?” It’s that type of playfulness that will delight general audiences, but may rub hardcore Marvel fans the wrong way. Still, it’s nice to see Deadpool repeatedly and bravely biting the hand that feeds it.

It’s difficult to envision Deadpool taking a seat at the X-Men’s dinner table any time soon. Much like the Guardians from Marvel Cinematic Universe, he doesn’t play well with others. He works perfectly, however, as a breather from the increasingly-serious Captain America and Avengers storylines. It’s also refreshing to see that Marvel, despite its apparent license to print money, is still willing to poke fun at itself. That bodes well for a cinematic future packed with enough superhero movies to choke a horse. In the meantime, enjoy Deadpool as the gleefully rude and grating action-comedy that it is.