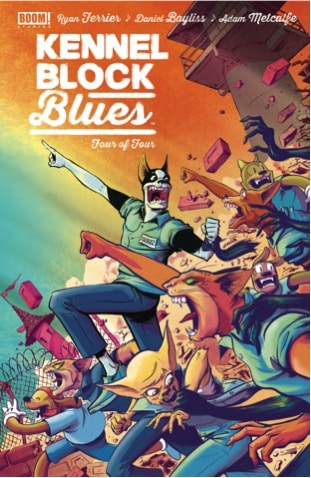 After the heavy, emotional, penultimate issue of Kennel Block Blues, the buildup from Sugar and Oliver’s solitary confinement stint has lead to the final rush for freedom outside the walls of the kennel. Upon Sugar and Oliver’s return to the regular population of the kennel, they find the cats and dogs at each other’s throats. Mayhem has broken out in the cafeteria. Pickles is no longer in charge of the cats and has been dethroned by the new queen Thibault (and her newspaper crown), held up high by Cleo and her cronies on a folding mattress throne. Sugar and Oliver must find a way to avoid the madness that is taking place around them and perhaps use it to their advantage to escape.

Ryan Ferrier has crafted some very lovable characters with plenty of memorable moments in this short series. Kennel Block Blues is a testament to a writer who has a good handle on formulating three-dimensional characters, even those without much of a back-story. Pickles and Frisky, in particular, have some stand out, honourable moments in this issue. Each cat, dog, and rabbit have a unique personality that play key roles in developing one another’s character arcs. Whether it’s through the death of a character, the tenacious confidence of Sugar that helps steer Oliver away from his doubts and fears, the violent hunger for power that drives Thibault, or the sacrifice of a life to provide an extended life for others, there is plenty of genuine thought that has gone behind crafting what drives the attributes of the various characters in this anthropomorphic tale.

See also  'Power Up!' #6 brings the colorful magical girl series to a close

Daniel Bayliss continues to play with the comic form, with a wide array of visually pleasing frames, single and double page spreads. The issue opens with the top of a single page spread focusing tightly on a foot being chomped on by a cat, Sugar and Oliver placed just slightly below in the background, taken aback by the craziness that ensues. There is, of course, room for a bit of laugh amongst the violent image as a ball of yarn rolls just underneath the action. Bayliss’s images throughout this series do a great job at combining the dramatic and comedic nature of Ferrier’s scripts, balancing the two tones in a way that doesn’t feel awkward but well paced.

The opening page is followed by a Where’s Waldo-esque double spread in which Sugar and Oliver are coloured in burgundy, placed amongst the same space to indicate their movements amongst all the fighting. Bayliss’s lines are still as expressive as they have been through each of the issues, showing the tension between Thibault and Cleo and the nervous but excited faces of the animals knowing that their chance of freedom is nigh. 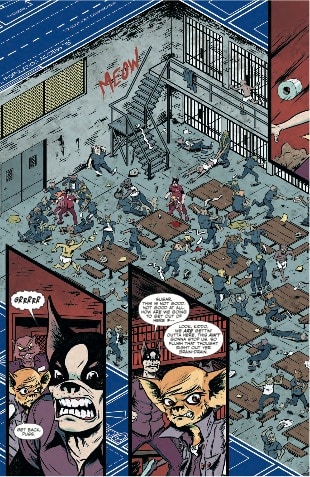 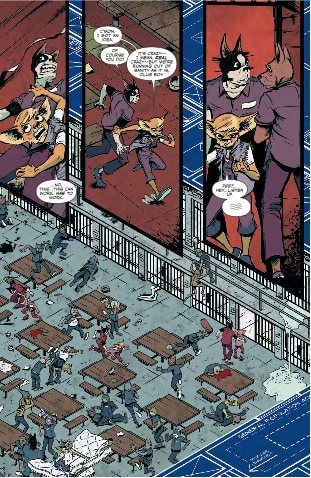 Adam Metcalfe uses splashes of red amongst a muted orange during the chaos in the cafeteria to draw attention to the multiple individuals in their blue uniforms as they duke it out. Red becomes especially haunting once the black, floating arms of the guards come into play; the colour follows the wavy smoke arms, splattering the frames and filling the small windows on doors as if trying to break through. The combination of the rough red splashes and the thick, black shadows really captures the claustrophobic rising tension near the end of the issue.

Letterer Colin Bell places some very pronounced, loud sound effects throughout this heavy, fast paced issue, drawing attention to the danger of the doors being thrust open that allows the evil shadow guards to swipe away the runaway dogs and cats. He places the word balloons well, considering the increasing activity within the frames, never really allowing the words to completely distract from the visuals.

Kennel Block Blues #4 wraps up an excellent series that had all members of the creative team providing a high level of quality within their own expertise to capture a real sense of heart, humour, and entertainment, all while continuing to play with the comic form. The final few pages embody what this series has pointed towards, examining what exactly freedom means amongst the relationships that have been formed between each of the characters and choosing to accept fate or pave the road to ones own destiny. The final few images leave a window open for a sequel series which, if not granted, leave a rather ominous taste in the mouth, considering the conclusion to Oliver’s journey.