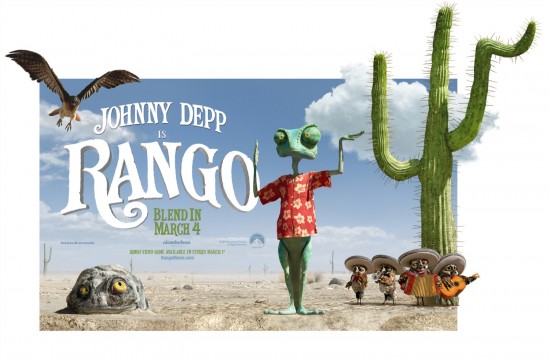 Gore Verbinski’s Rango opened Friday and topped the weekend box office with a total of $38 million in tickets sales, while receiving extremely positive reviews from critics nationwide.  What the filmmakers didn’t expect was for the animated film to cause a stir. “The film includes at least 60 instances of characters smoking”, said Kori Titus, CEO of the Sacramento-based non-profit Breathe California, “and that isn’t acceptable”.

According to USA Today, One of Breathe California’s projects is “Thumbs Up! Thumbs Down!” — in which trained young people and adults analyze films’ tobacco content. According to Kori Titus the only other animated film on par Rango’s continuous smoking was 101 Dalmatians, with about 60 instances of Cruella De Vil smoking.

“A lot of kids are going to start smoking because of this movie,” said Stanton Glantz, director of the Center for Tobacco Control Research and Education at the University of California-San Francisco. Youths who frequently see smoking onscreen are two to three times more likely to begin smoking than peers who rarely see it depicted, he said.

Virginia Lam, a spokeswoman for Paramount, Rango‘s maker, said the title character never smokes. “The images of smoking in the film … are portrayed by supporting characters and are not intended to be celebrated or emulated,” she said.

With all the fuss Rango has renewed the call by Glantz and other anti-smoking advocates for the Motion Picture Association of America, or MPAA, to rate any film that shows smoking as “R.”

Of more than 2,500 movies rated from May 2007 to May 2010, nearly three-fourths of those that depicted smoking were rated R, and instances of smoking in films not rated R have declined, MPAA spokeswoman Elizabeth Kaltman said. Still, she said, “the (ratings) system should not be held up as a vehicle dedicated to cause less smoking in films.”

The use of tobacco and alcohol in children’s films or television shows is not exactly something new. Apparently two-thirds of all major children’s animated films include the use of either. R.J. Reynolds once hired Fred Flintstone and Barney Rubble to star in an ad for Winston cigarettes. Still people believe that movie actors who smoke glamourize the act and send messages to teens that tobacco use is a highly desirable activity. As a smoke I sort of agree with that but I don’t really see animated characters influencing youth. What do you think? Should the MPAA have upped the rating on this one, or should audiences be smarter and realize that just because Rango is animated, doesn’t necessarily make it a kids film.