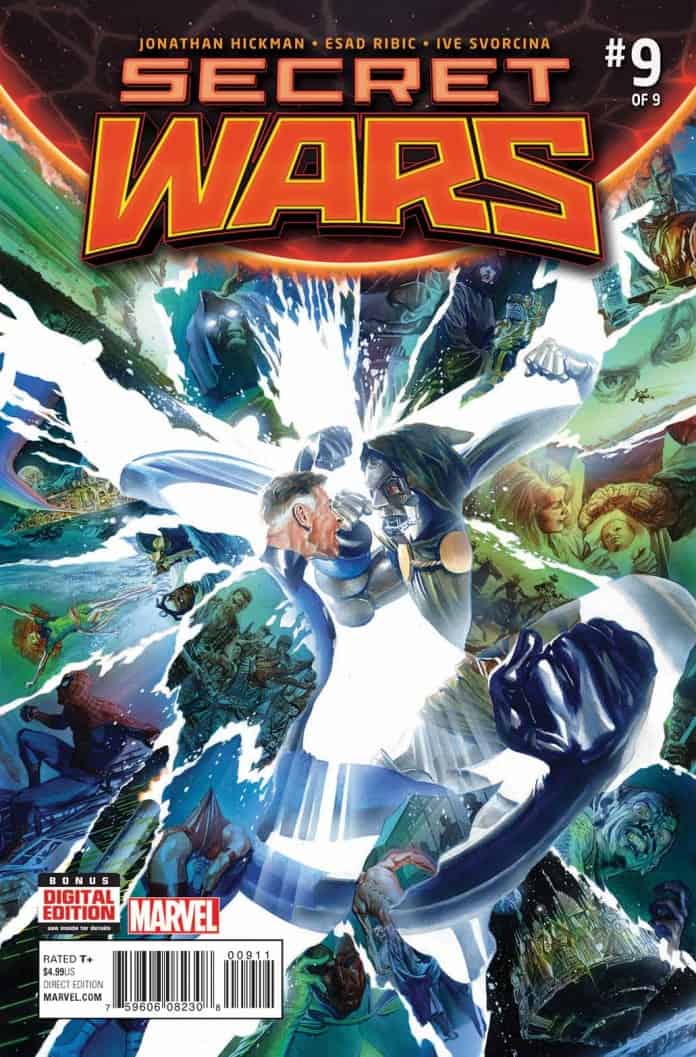 The central theme of Jonathan Hickman’s run on Fantastic Four was the triumph and continuation of life.  This was made evident in the classic Fantastic Four #604.  The central theme of Hickman’s run on both Avengers and New Avengers was the inevitability of death.  Being a sort of continuation from both of these runs, Secret Wars #9 concerns itself with rebirth, specifically a genesis borne from decay.  While serving as a great spiritual successor to his previous works, the final issue of Marvel’s biggest event more importantly provides a thrilling conclusion.

One of the most noticeable aspects of this issue is how smart it is.  Hickman knows exactly which ends to tie up and which threads to leave hanging.  But never once, does it ever leave readers feeling jaded or shafted.  The Fantastic Four’s outcome makes perfect sense while Doom’s fate leaves enough to be molded by later writers.  Everything from Doom’s battle with T’Challa to Reed’s confrontation with Doom to the issue’s denouement are all perfectly explored to the most effective degree.  What it ultimately comes down to is that this is an issue that’s just plotted and paced perfectly.

The climax of this issue is the highlight of the entire miniseries as Hickman masterfully encapsulates the relationship between Dr. Doom and Mister Fantastic.  This is because no other writer (save for maybe John Byrne) can write Doom as well and Reed Richards as honest as Hickman.  The crux of their relationship is that Doom has always been jealous of Reed,while Reed has always been frustrated by Doom’s arrogance and refusal to improve himself.  Any comic written by Hickman that features Dr. Doom will automatically be better off for his inclusion. Secret Wars has been a miniseries that thrusts Doom front and center, and this final issue in particular reaps those benefits.  Beyond the thematic and analytical, there are a ton of cool moments in Secret Wars #9 too.  God Doom has his own T-1000 moment, Reed Richards ends the series by flinging alternate universes into existence, and Esad Ribic absolutely nails the fight confrontation between Reed and Doom as he magnificently contorts Reed and brings to life Doom’s seething hatred of Reed.

As much as this final issue serves as a conclusion to Marvel’s DC-esque multiversal crisis, it also serves as a conclusion to his run on Fantastic Four.  Hickman finally (and temporarily) answers the age-old question as to whether the FF are primarily superheroes or imaginauts.  He gives the Richards family a new quest to embark on, and puts the fate of the entire multiverse in the hands of Mister Fantastic.  At the same time, Hickman restores the multiverse at the expense of Earth-616, which is renamed Prime Earth (I wonder what DC has to say about this).  There are still a few discrepancies however with the ending of this issue.  How did the characters who were murdered during the course of Secret Wars come back from the dead?  What’s the difference between Earth-616 and Prime Earth?  How was Prime-Earth created?  Despite the fact that all the characters involved in the climax are well suited to be there, those are the three most pressing questions that remain.

Amidst the rumors that Marvel CEO Isaac Perlmutter has been trying to dismantle the Fantastic Four franchise, Marvel gave them the perfect send off.  Hickman manages to dig to the very core of the Reed Richards/Dr. Doom dynamic while making the Richards family act as architects of the new multiverse.  It would have been nice to see the Human Torch and Franklin Richards have bigger roles in such a FF-centric story, but in truth, Secret Wars was really a story about Reed and Doom.  It’s a story that shows the biggest difference between the two in how they went about saving reality; Doom would rather preserve where Reed would seek to expand.  With no ongoing title of their own, the team disassembled and their future uncertain, the Fantastic Four franchise has never seen darker days.  Given all the behind the scenes corporate controversy, it’s only fitting that Jonathan Hickman and Esad Ribic give them the happy ending they all deserved.  Even Dr. Doom.

See also  Spike Jonze, Stephen Colbert and Grover Walk Into a Bar (Actually they Made a Short)