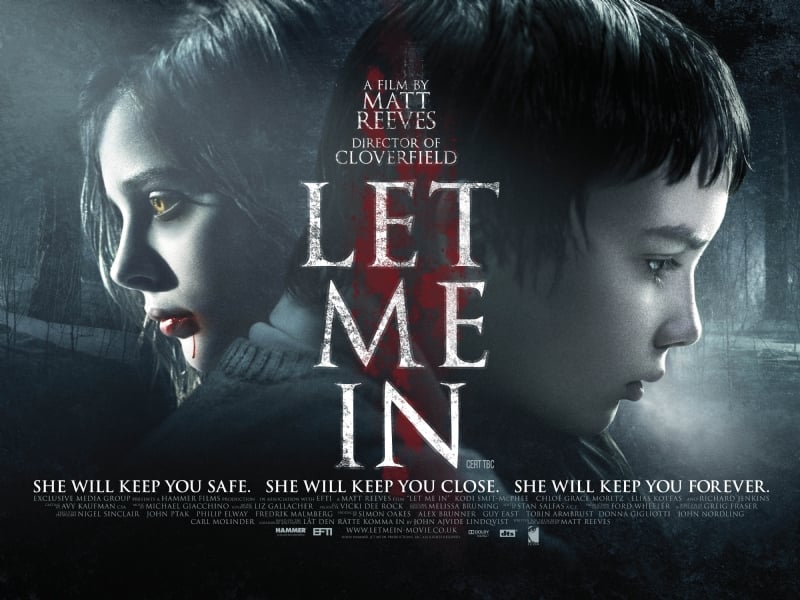 Based on the best-selling Swedish novel “Let The Right One In” by John Ajvide Lindqvist, and the highly-acclaimed film of the same name, Let Me In is a haunting, provocative thriller and in many ways is better than the original. While originally pegged as their own vision of the novella, it’s clear that director Matt Reeves has mimicked Alfredson’s distinctive sense of style and looked to his adaptation for visual inspiration. Reeves takes a bold and critical step in shooting an almost shot-for-shot remake of the Swedish vampire flick. But by injecting his own craft, he finds a way to harden it with a little more emotion and flavor. The pressure in adapting a story or remaking a film is that the filmmakers already have an archetype to which everyone will compare their work to. Some people will be unwilling to invite this film in, but those who do, will be rewarded. Let Me In is a film that achieves the rare feat of remaining faithful to its source material while emerging as a highly accomplished work in its own right… (read the full review) Making a major change of pace, director John Cameron Mitchell shifts away from profiling the eccentric characters that populated Hedwig & The Angry Inch and Shortbus with Rabbit Hole, and delivers an emotionally powerful film about a couple dealing with the death of their young son. Mitchell is possessed of certainty as a director, providing a steady hand and a plain style to the proceedings by stepping back, and letting the story and actors shine. He has a talent for drawing us directly into his characters’ lives and making us feel what they feel. This is the kind of restrained, deeply human relationship picture that Hollywood has long forgotten how to make. Mitchell has made a movie in which everything feels organic and strikes an unbelievably effective balancing act between sincerity and well-earned empathy… (read the full review) Monsters has already been pigeonholed as this year’s District 9, a somewhat lazy comparison as although they share similar aesthetics, the film is far more of a companion piece to Duncan Jones’s similarly acclaimed Moon from last year. Whilst District 9 was a solid, entertaining example of genre engineering despite its bludgeoning anti-racism message, Monsters surpasses its alleged progenitor as a far more finessed and subtle piece of work, a film which marks Edwards as a natural story-teller. This consistently surprising and lithe film retains a genuine sense of wonder and mystery in its not necessarily being the fanboy-friendly monster-mash that its misleading marketing may have you believe… (read the full review)

One of the more downright inspirational films here is Marwencol, the story of accidental artist Mark Hogencamp. After being targeted and beaten outside of a club one night, Hogencamp came out of a coma with severe physical and mental damage. His personal attempt at recuperation was to construct a 1/6th scale reproduction of a small WWII era town in his backyard, dubbed Marwencol, and photograph the happenings of that town. After years of building and story-telling on his own, his pictures are finally seen outside of a small group of confidants, and he is offered a gallery show… (read the full review) A critical darling since its Sundance debut, Debra Granik’s second feature (following the touching drug-addiction drama Down to the Bone) cements her, along with Kelly Reichardt and Andrea Arnold, as one of the most skilled female directors of the new century. Winter’s Bone is a genuine triumph, a great movie with astounding performances and Jennifer Lawrence delivering a stirring turn in a once-of-a-lifetime role. The tough tale of survival in a harsh environment continues to grow in the memory months after it was first seen which is always a sign of something great… (read the full review) #5 – Exit Through The Gift Shop

In Orson Welles’ sleight-of-hand manifesto F for Fake, the notoriously puckish writer-director took on the notion of “expertise” – ostensibly in the world of high-class art, but really as a general concept, as a way of subtly lashing out at his detractors, as well as repositioning the very concept of moviemaking as a kind of fakery in and of itself. The movie worked both as an evocative cinematic essay and as a lovingly biased take on artistic credibility. While renowned UK street artist Banksy’s film debut Exit Through the Gift Shop isn’t on the same level as Welles’ masterpiece, Fake works as a useful reference point for the way in which Gift Shop slyly deceives the audience through misdirection before showing its true colors as a formal art prank with an axe to grind… (read the full review) Edgar Wright’s wildly innovative film adaptation of Bryan Lee O’Malley’s series of graphic novels should more than satisfy fanboys while engaging adventurous newcomers. Wright does a terrific job establishing and adhering to the tone of the book while providing a faithful adaptation of O’Malley’s six-part series. While other comic book adaptions have failed when translating to the medium, Scott Pilgrim overachieves in what it sets out to do. A bold exercise in the liberation of movie conventions, Pilgrim is a mash up of a comic-book movie that dares you to dive into its chaos. Pilgrim boats an enormous burst of imagination – a unique and totally original work of art which still finds ways to channel moments of the humanity and humour present in O’Malley’s work. Its outer shell may be a comic book/video game hybrid movie but Pilgrim is really a tender, smart and subtle coming of age flick that doesn’t focus on love but a shallow twenty-something romance. While most Hollywood teenage movies give us troubled youths and earthshaking-life changing revelations, Scott Pilgrim presents us with the everyday simplicities and past times of today’s youth, throwing it all into a blender and pouring out one audacious, irresistible piece of pure entertainment. Like The Breakfast Club, Scott Pilgrim is a generational milestone that seems destined to be a film whose impact is measured in years to come… (read the full review) Many will question Nolan’s need for having quite so many rules and restrictions for the film’s version of the subconscious, and by extension the film’s occasionally tiresome opening stretch. While Nolan’s screenplay (his first since Memento) could certainly use some streamlining in that regard, and some of the plot mechanics feel extraneous (totems?), the sluggishness isn’t a deal-breaker considering the brisk pacing of the rest of the film. Like all of Nolan’s work, it’s the commitment you’ll just have to make in order to be effectively immersed. “Critic-proof” is a term usually thrown at hacks and “audience-friendly” studio pawns, but Nolan’s works occupy a different definition of “critic-proof:” you see Inception (or The Prestige, or Memento, or Insomnia), and his ideas either “take,” or they don’t – but going in with the willingness to be awed certainly helps… (read the full review) The comparisons to Citizen Kane and other similar “rise to the top” filmic narratives are not entirely unwarranted, at least on a thematic level Fincher’s film seems to be a natural progression of their ideas brought into the computer age. How the film departs from these original models is most revealing of a contemporary relationship and perception of success. In many ways, few things have changed. We still understand, or more accurately “value” the idea that money cannot buy happiness. Similarly, we enjoy watching industry giants fall; it is strangely cathartic to watch those who are better off or somehow more successful “equalized”. Not that Zuckerberg really falls, Facebook is more successful than ever, but some kind of moral reckoning already seems to have been passed on his success. It is how we so keenly forgo personal responsibility and freedoms to corporate powers that has completely changed the landscape of contemporary success stories. This is not only true for a millions of people registered with Facebook, but for Zuckerberg himself… (read the full review)–