Stellaris is a divisive game. It shares the familiarity felt throughout most Paradox games, but—like its cousins—has an intense focus on one particular element. This has been Paradox’s MO for a while; where Crusader Kings takes on lineage, Victoria focuses on Industry and the Pops that drive it, and Hearts of Iron intently examines combat. Here, the choice is fitting and not entirely unexpected: exploration. To that end, Stellaris marks a move sharply away from the realm of Grand Strategy and much closer into 4X, something considered so egregious by some Paradox fans that they might stop reading right now. But they shouldn’t.

Paradox wisely chose to give players monumental ability to tailor their experience to taste. This means obvious things like deciding the exact number of Advanced AI starts to fit your preferred style of (a)symmetrical play, but even some of the mundane options have a dramatic effect on gameplay; galaxy size and type, for example, have a significant impact on how quickly the game turns from the exploration-focused early game to the combat/diplomacy-focused mid-game. A small galaxy will fill up quickly, leading to blitz wars before you’ve even developed your first sector. Picking a spiral-arm galaxy has the potential to box you into your arm if another species beats you in the colonization race, which means you’ll either have to play nice and get a civilian access treaty or start a war. A small galaxy with multiple arms will very quickly feel familiar to players of Paradox’s other games, whereas those who prefer the 4X side of things might want to stick with the larger, more open options. This, of course, is all before you even leave the galaxy design menu. 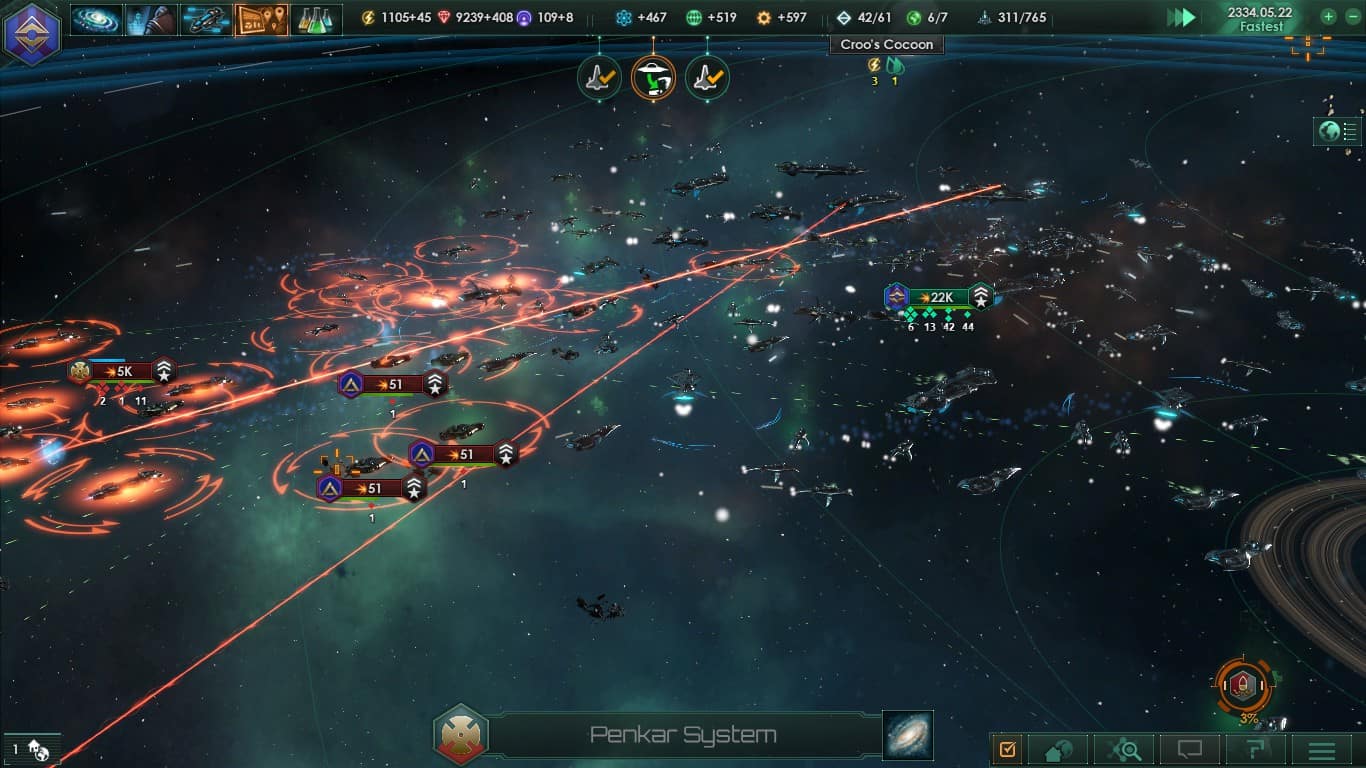 Like most Paradox games, battles are automated. Think carefully before engaging.

The next step, creating a race, entails a distinct set of ethics, traits, and government. This can be just as much of a tactical decision as the galaxy design, though it’s by no means as limiting; whether you’re a xenophile and incorporate alien races into your ranks or a xenophobe who enslaves those same aliens, any racial deficit can be circumvented with a bit of strategy—though not without a cost. Policies complicate the situation even further, with a choice of laws ranging from whether or not to use AI to the ferocity of your bombing runs. Even your decision to play tall or wide has implications beyond personal preference; wide empires enjoy more access to minerals, but will inevitably suffer severe border friction, sector management, and dissident pop penalties. Tall empires, meanwhile, generally play somewhat conservative, but also tend to have better relations with other empires and within their own. Whatever you choose, your decisions will impact every relationship you have in the game.

For all the complexity of these decisions and the resounding impact on gameplay they have, Stellaris is thankfully nowhere near the spreadsheet-nightmare some other strategy games become. Everything is streamlined and minimalist, so much so that it’s almost too simple. Ship icons in the galaxy view are the same regardless of their class, which might not seem like too big of a deal until you become a multi-sector empire. Finding and differentiating your armies from your fleet is a tedious task, and even then essential information is often left out. Colony ships, for example, don’t clearly list what pop is included in the ship, making it easy to eagerly send your new genetically-modified water-dwelling subspecies to a desert world by mistake. Another particularly irritating issue is the “inefficient planet management” modifier that subtracts a tenth of your overall credits per month until you get within your limit of personally-owned planets and all of your sectors are within theirs (the latter of which is not shown). These aren’t nitpicks, and are only the most frustrating of many such difficulties.

This streamlining goes beyond the game’s aesthetic and into its core mechanics, where thankfully it fares significantly better. Paradox faithful will see the remnants of previous titles included in elements of Stellaris’ gameplay, though the degree to which they are relevant varies. The leadership system varies by culture, but is probably most closely related to EU IV’s in that it is largely uncontrolled by the player and each successor offers different buffs. Fans will also be familiar with the combat: do all your strategy beforehand, because it’s out of your hands once the shooting starts. Pops return and are among the most complex issues players will contend with; race, traits, ethics, happiness, and location converge in every pop of every planet to make a complex interconnected web of interactions. 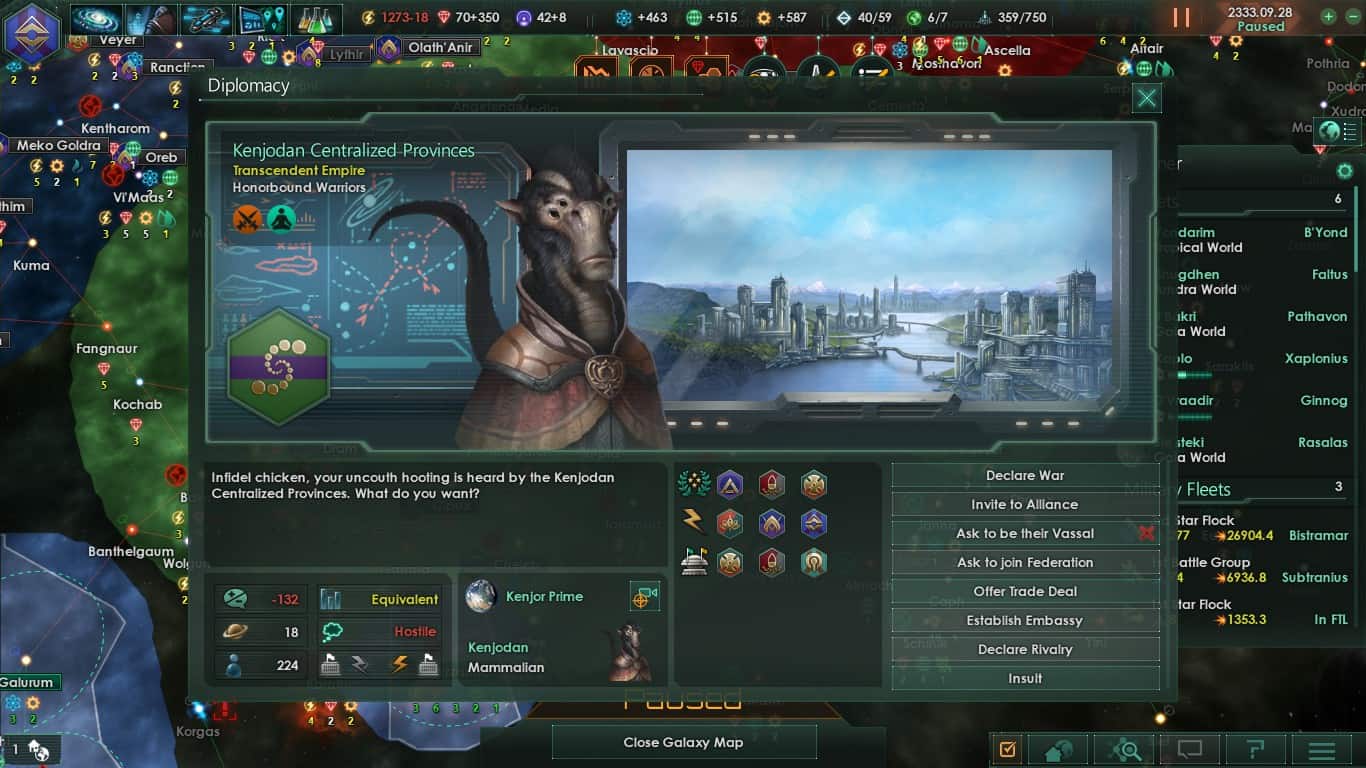 The species designs are usually fairly unconventional, though diplomacy with them is limited.

Despite this, it is among the least intimidating strategy games I’ve come across, more of the frustration arising from a lack of explanation than an inherent flaw in the design. Some purists might take offense to the streamlining of these features, but in actuality Paradox has just made them less obtuse; many of these offer more—not fewer—options for strategy than Stellaris’ spiritual predecessors. Take leaders, for example: instead of a bump to nebulous counters like “administrative points,” leaders instead get traits with a clear associated benefit (increased research speed, more minerals, faster ships, etc.). Moreover, how that leader comes to be chosen varies, and the associated benefits change with it; in the case of a transcendent oligarchy, there’s an additional “agenda” buff that makes it more enticing to go after, though you can only change to this type with enough influence and the right ethics. Stellaris rightfully makes the choices simple and diverse, allowing the player to create complex situations through their choices.

The only major flaw the game suffers is in its diplomacy, and unfortunately it’s pretty significant. Not only is the concept of casus belli completely eschewed—meaning, unless restricted by a treaty or in a Federation, anyone can go to war with anyone else at any time for any reason—but your ability to strengthen ties with other nations is essentially limited to trade deals and establishing an embassy, and even the former is highly dependent on exactly how much the other party dislikes you. It is almost impossible to get a nation that hates you, or even strongly dislikes you, to change their opinion except through time. An embassy caps out at +100 opinion, and it’s easy to run a -200 or worse opinion score with a nation whose ideology strongly differs from your own. There are apparently less options for intrigue in 2200 than there were in 900, to the point that you can’t even send a gift (read: bribe) another nation for a quick relations boost (though you can insult them, for reasons unbeknownst to me). Federations are, as I presumed they would be, poorly implemented in spite of the admittedly interesting idea of combining technological forces in combat. Two Federations led by members who despise each other will be in near-constant warfare. The current two federations in my game have been at war almost every time I’ve checked for the last twenty hours of gameplay. The cynics among us might think that Paradox is too familiar with complex systems of diplomacy to have unintentionally left all this out, but I digress. 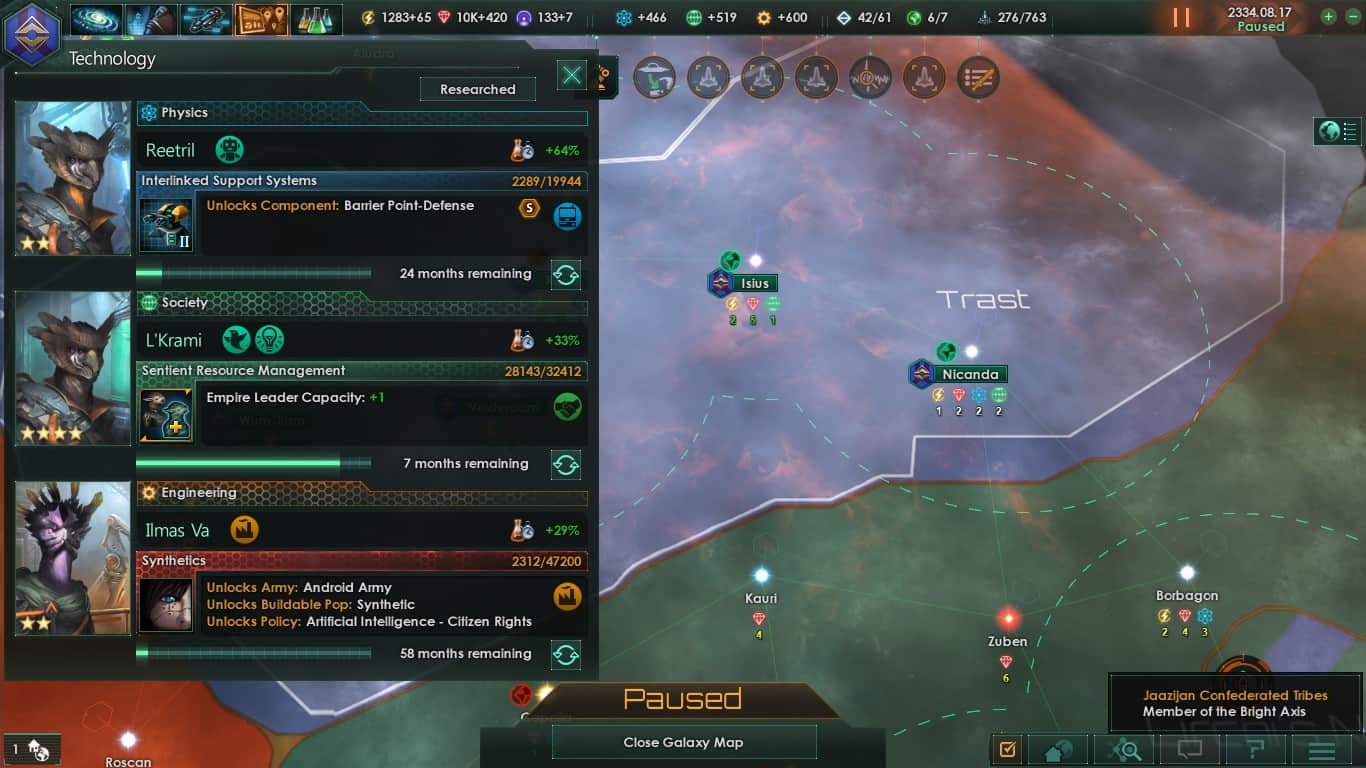 The technology tree varies by culture and even by the assigned scientist. Rare technologies are shown in purple and “dangerous” technologies in red.

Even then, Paradox manages to bring something worthwhile out of their blunders. In this case, the Federations serve as the building blocks of a strong late-game, either allowing you to make a mad grab for your goals (if you’re behind) or putting up a reasonable resistance to your empire if you dominated mid-game. Generally, expansive empires don’t get along too well with federation-builders, especially if they lean on the militaristic side. The result is a fairly consistent barrier, or at least a negative reaction, to the blobbing that so often occurs once you have a significant advantage to the AI in other games. The AI itself is not the smartest, but it is smart enough to put your fledgling empire down if you let it. Combine this with some end-game disasters that I won’t spoil here (though I will say, several of them are related to dangerous research…Use your imagination.) and you’re unlikely to get bored even after dozens or hundreds of hours.

Ultimately, despite its many UI issues and a painfully simplistic take on diplomacy, Stellaris is not just one of Paradox’s best games, but also one of the best games in recent memory. Stellaris manages to learn from all of Paradox’s previous endeavors, and in many respects succeeds at their core mechanics better than they did, even when those mechanics are not the focus of this game. The blatant holes left for DLC are obnoxious and transparent, but for the most part don’t significantly impact the experience. Stellaris is an exceptionally well-crafted mix of ideas, from the simple to the revolutionary, even if it doesn’t feel entirely complete, and it would be unfortunate for any strategy fan to miss it.