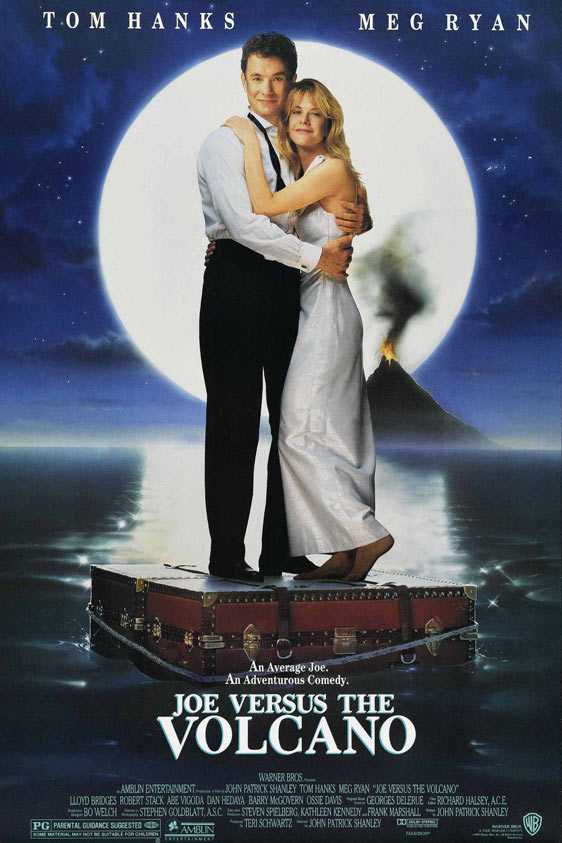 Joe Versus the Volcano
Written and directed by John Patrick Shanley
USA, 1990

Once upon a time, Tom Hanks was a comedic actor. From the early 1980s until about the early 1990s, Hanks made a name for himself as a goofy, fun-loving everyman. This streak continued until about 1993 when he won his first Academy Award playing an AIDS victim in the very laugh-free Philadelphia. This film marked the beginning of “serious Hanks” and the lovably dopey actor from the 1980s seemed to have evolved. One of the actor’s last full-on comedic roles was in the highly underrated romantic adventure Joe Versus the Volcano, a film critics weren’t too fond of during its 1990 release; however, it did strike it big as a cult favorite.

Joe Banks (Hanks) is a depressed hypochondriac who works at a dreary factory office in Staten Island. He couldn’t be more miserable and he works for a disgusting human being for a boss in Mr. Waturi (Dan Hedaya). When Joe is told by his doctor (Robert Stack) that he has something called a “brain cloud” and he is going to die in a matter of months, Joe decides to take matters into his hands and quits his awful job. Around the same time, wealthy industrialist Samuel Graynamore (Lloyd Bridges) visits Joe and proposes that he jump into an active volcano to appease a tribal people’s god on a Pacific island. This would in turn make a sizable profit for Graynamore. Joe accepts the proposition and his adventure begins. With Graynamore’s credit cards at his disposal, Joe goes into Manhattan to do some shopping. He purchases all the essentials for his trip including new duds, toys from Hammacher Schlemmer, and four giant luggage trunks which serve him very well throughout much of the film.

Joe Versus the Volcano is a quirky and fun film that, sadly, isn’t for everyone. Hanks is his usual charming self and the addition of Meg Ryan (in three roles) is a welcome treat. This would be the first of three onscreen appearances between Hanks and Ryan. The other two would be in 1993’s Sleepless in Seattle and again in 1998’s You’ve Got Mail. They will definitely go down in history as one of the greatest movie couples of all time. They just have this very natural way about them and a chemistry rarely seen in film today. With Joe Versus the Volcano, the duo join forces for the first time and in the movie, Hanks meets Ryan three times. She plays fellow office worker DeDe (brunette Ryan), Graynamore’s ditzy daughter Angelica (red-haired Ryan), and finally, Patricia (blonde Ryan), Angelica’s sister and the most normal of the three. Within seconds of meeting Patricia, you can just tell Joe is going to end up with her.

A good portion of the film takes place in the middle of the ocean, with Hanks giving a performance similar to a role he would deliver a decade later in 2000’s Cast Away. In fact, one of the film’s best scenes involves Joe gazing in awe of a gigantic ascending moon. For some reason, a gentle hum accompanies the moon as it lights up the sky. Joe is in absolute astonishment as well as being significantly dehydrated. He thanks God for his life and quickly passes out. This is just one the film’s many beautiful moments, moments which go beyond normal storytelling. Joe Versus the Volcano is like a fairytale, a fantastical tale full of uncommon heroes and plenty of surprises.

Writer/director John Patrick Shanley has given us a film that not only tells an interesting story but does it in a way that exceeds conventional narrative techniques. Joe Versus the Volcano contains two sides: the realistic and the dreamlike. Throughout the film, both of these worlds coexist, making for a very compelling and mesmerizing viewing experience. Joe meets colorful characters and experiences things ordinary protagonists usually don’t. Neon lighting and odd juxtaposition of objects and places are commonplace in the film. A similar world was conjured up in 1987’s Moonstruck, another romantic comedy which earned Shanley an Academy Award for Best Original Screenplay.

With Hanks and Ryan leading the cast, one must highlight the immense talent and offbeat humor supplied by Joe Versus the Volcano’s brilliant supporting cast. Ossie Davis is simply genius as Marshall, Joe’s sage-like chauffeur who instructs Joe on the finer things in life, clothes, hotels, etc. Barry McGovern gives an eerily perfect performance as a luggage salesman in another one of the film’s best scenes. Abe Vigoda pops up as chief of the Waponis, the island’s inhabitants. Nathan Lane is almost unrecognizable as one of the Waponi officials. With all this talent stuffed into one picture, it’s a shame more audiences didn’t take a liking to it.

If you watch Joe Versus the Volcano today, you’ll probably look at Hanks and think “Wow, what happened?” He was so full of life and energy back in the early 90s, a true comedy giant. Now, he seems to limit himself to dramas and mediocre biopics. Perhaps it’s due to aging. He’s slowed down a bit but his youthful spirit does seem to shine through occasionally, most recently in Saving Mr. Banks, where he played Walt Disney. Films like Joe Versus the Volcano transport audiences to a different time, a time in which young Hanks and the always beautiful Ryan fall in love. While their bodies age, their love lives forever.

If you are in the mood for a strangely beautiful film that captures the spirit of adventure and everlasting love, Joe Versus the Volcano might be the film for you. Steven Spielberg served as executive producer on the film and his vivid imagination and creative spark is present all throughout. Hanks hit the bullseye with this underrated gem and thanks to DVD, you can now see it, some 24 years later and remember, don’t forget your luggage.