Home
Tolkien’s The Hobbit to Become a Trilogy?
Prev Article Next Article 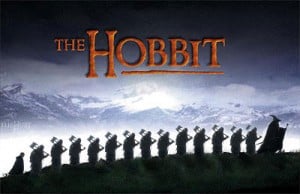 Yesterday, blog website MarketSaw, specializing in information for 3D videogames and movies, said that the next much anticipated Tolkien adaptation, The Hobbit, will now be produced as a trilogy.

Pan’s Labyrinth director Guillermo Del Toro has already signed on to direct The Hobbit series, which was confirmed as a two-film deal with New Line Cinema back in 2008. But it is now rumored that the LOTR director himself, Peter Jackson, will be directing a third movie that will bridge The Hobbit to the original LOTR movie series.

In addition to trilogy news, the website is stating that the series will also be shot in 3D. Although the source seems vague, fans are already vocalizing their opinions, saying that 3D will not live up to the same Middle Earth that was brought forward with LORT and will be, in all senses, pointless.

In addition, to create a film to simply link the two ‘trilogies’ together seems awkward. Tolkien did write The Silmarillion, a book of supplemental material about characters and side-stories of Middle Earth, and fans are already discussing the possibility of creating a film about Tom Bombadil, a crucial character left out of the LORT trilogy. The possibilities are endless in creating a bridge film, but would it be worth it?

The LORT trilogy went on to win countless of awards and was a blockbuster phenomenon. It is for certain that fans would be grateful to have more Middle Earth action brought to them. Still, the film has yet to be cast, the script has not been finalized and the first film is only slated to be released in 2011. One can only wonder whether this trilogy will become a reality.