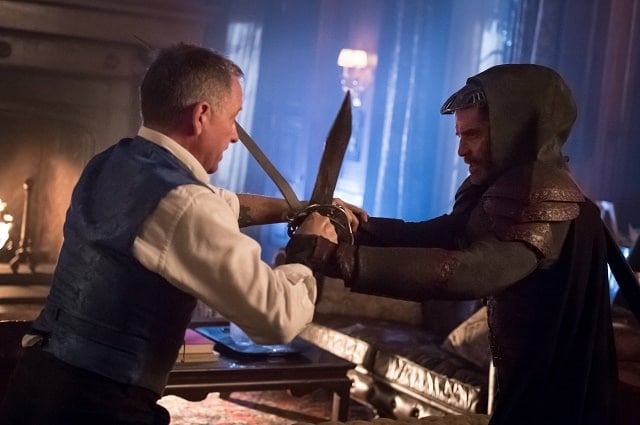 Gotham heats up this week as Azrael is unleashed onto the City, causing everyone within his purview scrambling to avoid, or attempt to end, his rampage. There is Professor Strange covering his tracks, Tabitha planning her departure, and Gordon trying to take down Azrael before he can do any more harm. It’s a race to beat the clock in this week’s action packed hour.

The past couple of episodes, while still good, have felt more like set up for more interesting things to come with some characters being kept in stationary positions while Gordon and Bruce explore their hero journey. These episodes merely teased that it may be putting more villains into play instead of actually dealing with what that would mean to our heroes. “Unleashed” makes more of an effort to move that plot forward while also including more of the action that Gotham, when it’s at its best, is known for.

There are many interesting threads at play here, such as Nygma’s motivated escape, the mission to save Firefly, and the shaky alliance between The Penguin and Butch. But the episode keeps both Bruce and Gordon in the center of an impressively structured episode that manages to utilize all these plots within the scope of the Azrael plot. There is a clever turnabout in the narrative where Azrael at first continues his mission to assassinate Gordon, but then the wheel turns when he switches gears to target Bruce instead, after he is reminded of his former life as Galavan. It’s a bit of game changer that keeps the characters on their toes.

While Galavan has always maintained his status as an interesting villain, his complexity continues here in this Azrael arc. The way Gotham plays with the expectation of how Galavan would react when his memories returns is done extremely well and pays off nicely in the scene when Tabitha tries to remind Azrael that he is really Galavan. The twist comes when he remembers his life as Galavan and it appears that he recalls his old grudges as well, as he without hesitation stabs Tabitha for her previous betrayal. It’s an eventful moment where James Frain continues to kill it with his off the wall and entertaining performance as Azrael.

The resolution of Azrael’s arc appears to be both definitive and satisfying with good yet dark humor, which is the tone that Gotham works best.  While Galavan serves well as a metaphor for Gordon’s guilt being an unstoppable force, the manifestation needs the appropriate closure and when it comes to the Gotham way of closure it can be big and nasty, and that’s exactly what we get when Penguin and Butch come in as Gordon’s cavalry riding in with a huge missile launcher that completely decimates the resurrected Galavan to bits. The way that The Penguin and Butch revel in the joy of destroying their joint enemy is so darkly humorous and satiating, that one can’t help but delight in the horrific vanquishment of such a hated villain.

In the end, “Unleashed” is a solid episode that not only serves the basic functions of a well-made Gotham episode, but pushes the boundaries to achieve one of the most satisfying episodes of the season. 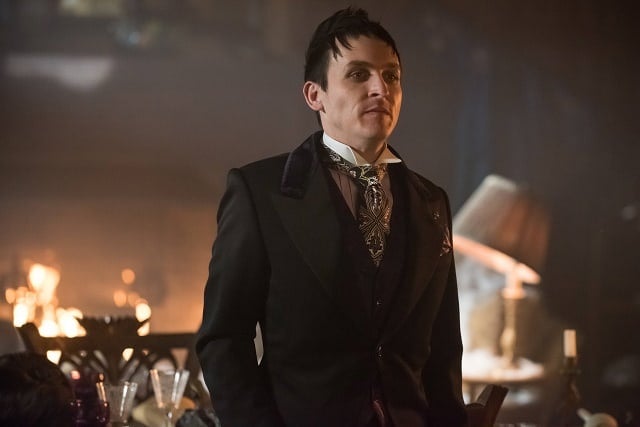 Last time we saw Ed Nygma, he was reeling from his discovery at the Indian Hill level of Arkham Asylum. As it turns out, Nygma is so thoroughly creeped out that he is motivated to escape the premises, which he manages to figure out with a little help from Cat. But unfortunately for him it looks like his freedom will be short-lived. It’s interesting to see Nygma react this way as he is usually intrigued by villainous nature. It seems to state that even Nygma has his limits of depravity and that line is drawn at monster creating experimentation. Cory Michael Smith does a great job at showing this level of Nygma with scenes that show him shaking his arms and head as though to shake the creeps right off himself. Also in this episode we are giving an all too brief interaction between him and Cat, which is just really fun to see. Hopefully we will get more Cat and Nygma exchanges in the future.

The Penguin narrative as of late has been pretty immobile as his most significant development happened in “Into the Woods”, where he returned to his homicidal ways. Since then he’s either been out of the picture or only learning about things that could motivate his return to Gotham. The question is now that The Penguin is back will he try to regain his position as King of Gotham? Will he let Butch and Tabitha continue their reign over Gotham, although he does have a vendettas against both of them? It’s uncertain by the end of the episode but there are possibility for more Penguin hijinks, at least when a certain villain in Professor Strange’s resurrection program gets up and running. Or should I say swimming?

Throughout the season the characters who have been given perhaps the least to do have been Butch and Tabitha, which is unfortunate because it may have proven interesting to see more of their rule over Gotham City. This episode does a great service to both characters though with Tabitha and her face off with Galavan and then later with Butch’s speech over Tabitha’s hospital bed. Jessica Lucas is allowed to give Tabitha more depth and sorrow than she has shown in the past, where her main goal typically been simply to show off Tabitha’s bad ass side. Here we see her talking to her brother Galavan and trying to speak to his humanity and in turn shows her own which Lucas is able to capture remarkably. Later at the hospital bed we, too, get to see Butch’s softer side, something that we know Drew Powell is capable of via past episodes. Powell is able to sell his admiration of Tabitha so well and he is often one of the characters on the show that one could feel the most sympathy towards and that’s mostly due to Powell’s excellent performance. Powell also gets the chance to show his bad ass side too as he holds the missile launcher that ends Azrael. 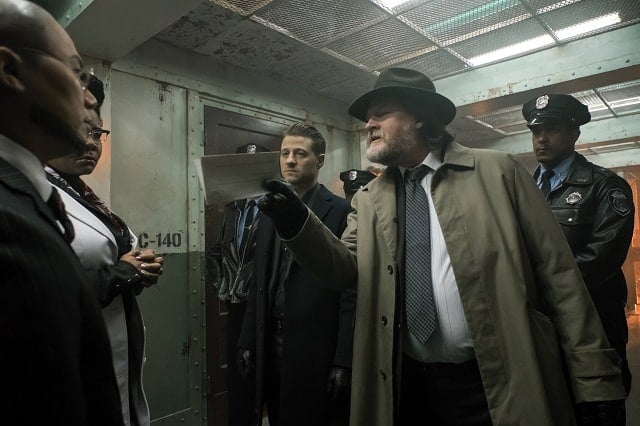 While the main spine of the episode has both Bruce and Gordon deal with the threat of Azrael, the investigation of the Indian Hill project keeps momentum as well. In the wake of Captain Barnes hospitalization we find Gordon, now a freelance agent, and Detective Harvey Bullock take up the reins of uncovering Professor Strange’s secret experiments. Bullock is a real go-getter but is mostly bark with no bite and Strange knows it and that’s why he appears unflappable when confronted with a Warrant that offers the GCPD limited privileges. There is a great moment in the episode where Bullock finds himself standing by the podium-esque area of the GCPD station and can see that the masses of officers have turned their attention towards him standing up there. The officers are looking for leadership and are looking towards Bullock for it because Captain Barnes is currently out of commission and Gordon is no longer on the force. As much of an unlikely leader as Bullock is, he gives it his all and gives a riling speech that is just as great a moment as you can find on Gotham. Donal Logue gives a great performance as Bullock, able to display his emotional rawness and unease at the helm of the GCPD, if only for this brief period.

With the GCPD cut off from exploring the premises of Arkham Asylum it leaves Bruce to tap Cat to sneak in and learn what she can. Gotham does a good job of explaining why Cat is the only person that can do the job and even better at establishing her motivation to take up the mission. Building from an earlier episode where he friend Brigit was taken in by Professor Strange for experimentation, Cat finally learns that she is in fact alive and possibly in need of saving. This brings new life to Cat’s story that we’ve been hoping to see more of because it shows her caring about someone. This all leads to the incredible cliff hanger ending that has her possibly being incinerated by her former gal pal Brigit. Could this be the end of Cat? Let’s hope not.

The episode is written by the series’ doubly skilled contributor Danny Cannon, whose directing talents established the visual tone of Gotham and his writing talent which featured some of the higher quality episodes. Cannon as a director created the world of Gotham, which set the standard of what the show should look like, but with his writing on such episodes such as “Red Hood” and “Strike Force”, but in particularly “Prisoners” which beautifully depicted the decline and rise of Gordon’s drive that set him back on his road to redemption. The way that Cannon handles dialogue, exposition, and plot twists is exceptional, in particular at being able to exemplify the best of what Gotham has to offer. “Unleashed” is Paul Edwards third directorial contribution to Gotham (Season One episodes “The Mask” and “Anvil and the Hammer”) and it is one of his better efforts. The action set pieces are excellently shot and entertaining. Whether it’s a showdown between Azrael and one of his adversaries or simply Cat breaking into Arkham Asylum, the visual style and tone of Gotham are present and the action flows well. Also the music timing during the ending sequence where Penguin and Butch destroy Azrael with the missile launcher is completely on point and darkly humorous.