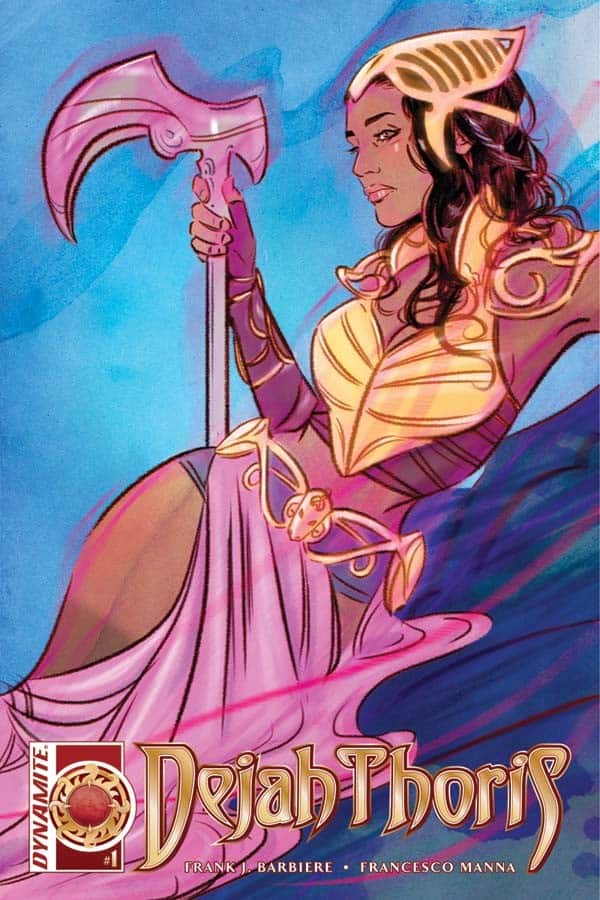 Dejah Thoris #1 is the equivalent of Daredevil: Born Again for the Princess of Mars as writer Frank Barbiere and artist Francesco Manna put her completely through the wringer as Dejah’s father, the ruler of Barsoom, has gone missing, and she is accused by Councilman Valoris of conspiring to assassinate him and worst of all, being adopted. Who knows if this accusation about Dejah’s bloodline has any truth to it, but it rattles her enough that she leaves the beautiful city of Helium for the red planet’s frontier. In this first issue, Barbiere establishes our heroine’s independence, kindness, and ingenuity as she makes her escape from a Helium prison cell. Some of the dialogue is awkward, like multiple characters describing Dejah as “sharp minded”, but Manna’s art shows Dejah’s competence as both a warrior and strategist in a more “show, don’t tell” way when she kicks a would-be assassin out of her prison cell. He and Barbiere also establish the loving relationship between her and the former Earth-dweller John Carter with a warmly colored bedroom scene from Morgan Hickman, but he is clearly a supporting character with Dejah Thoris’ quest to discover her true identity providing the impetus for the plot.

Hickman’s colors quickly establish the differences between Helium and the rest of Barsoom within a few pages. The opening pages show Dejah sparring as the warrior Larka and are filled with harsh oranges and yellows in contrast with the white, green, and gold opulence of Helium, the capital of Barsoom. But Barsoom isn’t just beauty and luxury as the dark, giant rat filled cell that Dejah is imprisoned in. A color that finds its way into the background of many scenes is a kind of twilight orange, like when Valoris shows up and discusses her accession to the throne. Something is rotten in the state of Barsoom, and Barbiere’s plot cuts to the chase and has her on the run by the time the final pages hit. 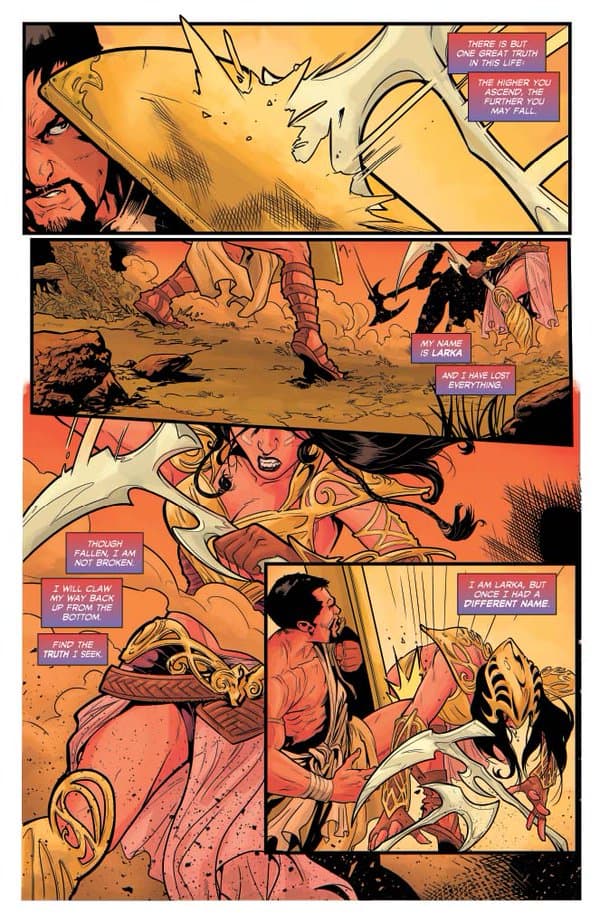 intriguing double page spread where Dejah ponders if her childhood was all a lie. (Barbiere adds to the mystery by not giving a definitive answer to this question.) However, he succeeds at making both male and female characters (especially John Carter and Dejah) attractive without sexualizing even though he exaggerates anatomy during fight scenes to show Dejah’s power and quickness when she gets surprised by an assassin. Hanna also establishes emotional relationships with a quick gesture, like Dejah’s handmaiden Thana hugging her, because she is mad that Dejah has been imprisoned and falsely accused. And this development doesn’t come out of left field because he and Barbiere show Dejah and Thana have an amiable relationship early on in the comic as they take in the sights of Helium.

Dejah Thoris #1 introduces new fans to one of science fiction’s oldest heroines (She first appeared in the Edgar Rice Burroughs novel A Princess of Mars in 1912.) while setting up a scenario where she must “find herself” as a character by going on the run as a common soldier. Frank Barbiere’s plot has an almost hyperactive pace as Dejah goes from queen to prisoner and fugitive in the space of a few pages, but he and artists Francesco Hanna and Morgan Hickman do allow her to have moments of reflection as well as bonding with John Carter and Thana. And the story will only get more exciting once Dejah begins to learn how to survive in the world outside Helium hinted at in the first few pages, and revelations about her past come to light.