Welcome to another Scream Factory blu-ray release review! Today we take a gander at the slightly subversive Cherry Falls, released on March 29th, 2016. 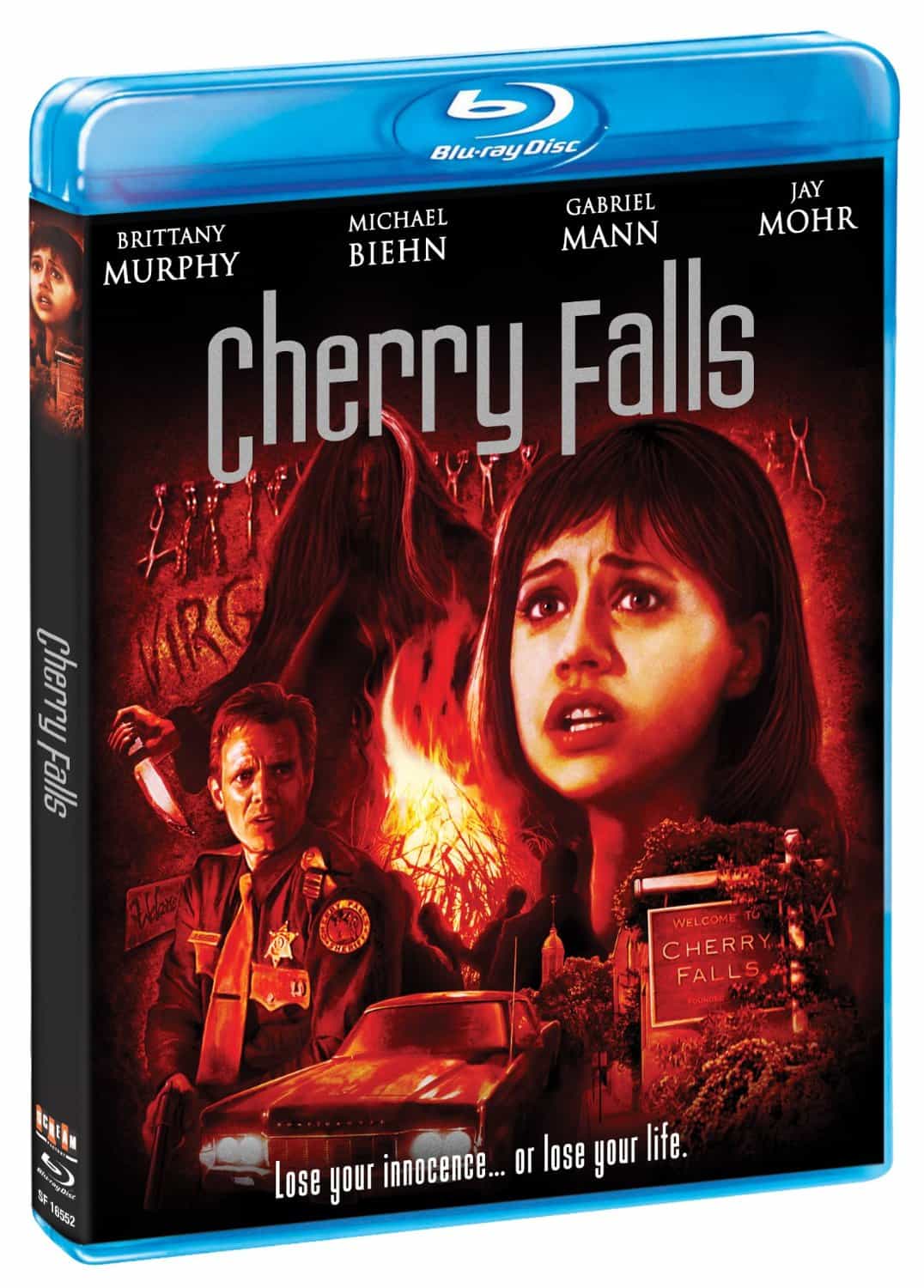 The disc is housed in the usual amaray blu-ray case, very much par for the course. However, Scream Factory went the extra mile with the physical presentation for this release. Even though the release is not being advertised as a Collector’s Edition, the studio has commissioned a new, original poster to adorn the front of the paper slip cover. Fans that pre-ordered the blu-ray early enough even received mini-posters with the same art, and what a treat that must be because it looks fantastic. A head shot of a very worried Brittany Murphy, Michael Biehn not far behind, the film’s ominous killer wielding a knife in the background, and a brilliant flame in the middle of the action, all of which is drenched in a rich, bloody red. Top marks. A menu screen showing clips greets viewers after the Shout Factory! and Scream Factory logo play. 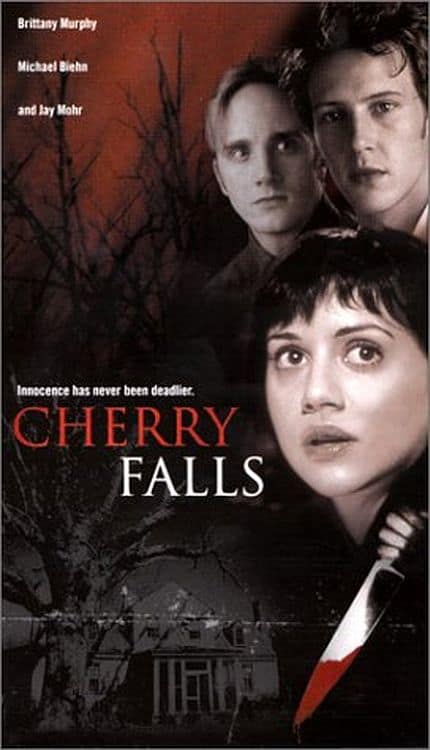 Cherry Falls is an ironic title of sorts, given how the story is set in a town that bears the same name and what transpires during its brisk 90 minutes. Jody Marken (Brittany Murphy, bless her soul) is a spunky teen just trying to survive through the usual challenges: her boyfriend Kenny (Gabriel Mann), her overprotective father who is also the town’s sheriff (Michael Biehn), class with mild-mannered professor Leonard Marliston (Jay Mohr) and the serial killer stalking the town’s virgin teens and slaughtering them. Yes, rather than take advantage of the naughty boys and girls, the mysterious figure with long hair, wearing women’s clothes, is offing the little angels that have withheld from fornication. When sheriff Marken explains this to the townsfolk, things naturally get rather discomforting. Will their kids have to force themselves to have sex in order to live through their teenage years? Well, the teens certainly think so, seeing as they plan a ‘pop your cherry’ party one night after school. Better hurry, the body count is rising!

See also  Fantasia 2012: Michael Biehn Refuses to be 'The Victim'

The massive ocean of slasher films from which fans can choose is intimidating, to put it mildly. With so many entries, where does one begin? Not to mention that there is only so much filmmakers can do with the genre to put a fresh spin on its inner workings. Along comes Cherry Falls to the rescue. While the film won’t necessarily rock anybody’s world, it evidently has a few more interesting thoughts on its mind than the average serial killer flick. Australian director Geoffrey Wright, who was coming off a certain level of fame with his homegrown project Romper Stomper (which was one of the first films that made the public aware of Russell Crowe), brings a level of wit and intelligence to the movie, aided in no small part by an eclectic, excitable cast and a knowledgeable, sharp script.

The visual aesthetics are mostly par for the course, notwithstanding a few individual moments that stand out, such as when Jody looks for her gay, school newspaper reporter friend in the institution’s basement drenched in sickly yellow sheen with creepy shadows around every corner. In fact, perceptive horror films aficionados will undoubtedly take notice of the picture’s editing, which regularly cuts away from the more horrific moments or those with more sexual energy. As revealed in the director’s commentary, new to this release, those choices were not made by Wright himself, who actually wanted to make a racier picture than the one audiences finally got, but the studio that meddled in the post-production process. It would seem as if a fair amount of footage is now ‘lost’, most of which consists of material that certainly made the studio blush. Do these editorial choices hurt the film? In some parts, if only because the movie is at times clearly cutting away from them or simply avoiding to show much at all, such as the potentially glorious orgy sequence at the end. 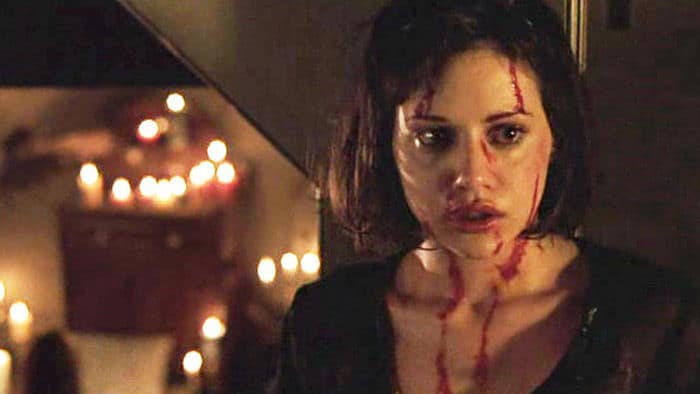 Luckily, much of the other ingredients are quite strong, most notably the script, which takes some witty shots at slasher genre tropes and regularly injects some odd, psycho-sexual undertones, including one brief moment when it appears Jody and her father might even have a ‘moment’ together. The most obvious of these comments is by having the murderer target virgins as opposed to sex-crazed adolescents. This forces almost everybody in the movie to adopt a different mindset than is usually the case in films of this ilk. What’s more, there are a handful of tension-filled scenes between Jody and her boyfriend Kenny, both of whom obviously like each other very much but have yet to get biblical. The ebb and flows between the two, handicapped obviously by the serial killer’s modus operandi, produce some unusually heated, frustrating exchanges.

Speaking of Jody, a few words should be written about actress Brittany Murphy, who passed away in 2009 at the young age of 32. While never representing what some would describe an A-list star, she worked regularly right up until her untimely death, always putting in interesting performances. She exuded an aura that distinguished her from the other popular actresses in Hollywood. That energy and personality are on full display in Cherry Falls. Her Jody is feisty, sweet, levelheaded, romantic, and quirky. She and her mother, played by Candy Clarke, share some weird, chuckle-inducing moments together, further emphasizing her idiosyncrasies. In other words, she is a fully-fledged character, with different sides to her personality just like anybody. Murphy, rightfully the film’s star, is really quite good in the part. 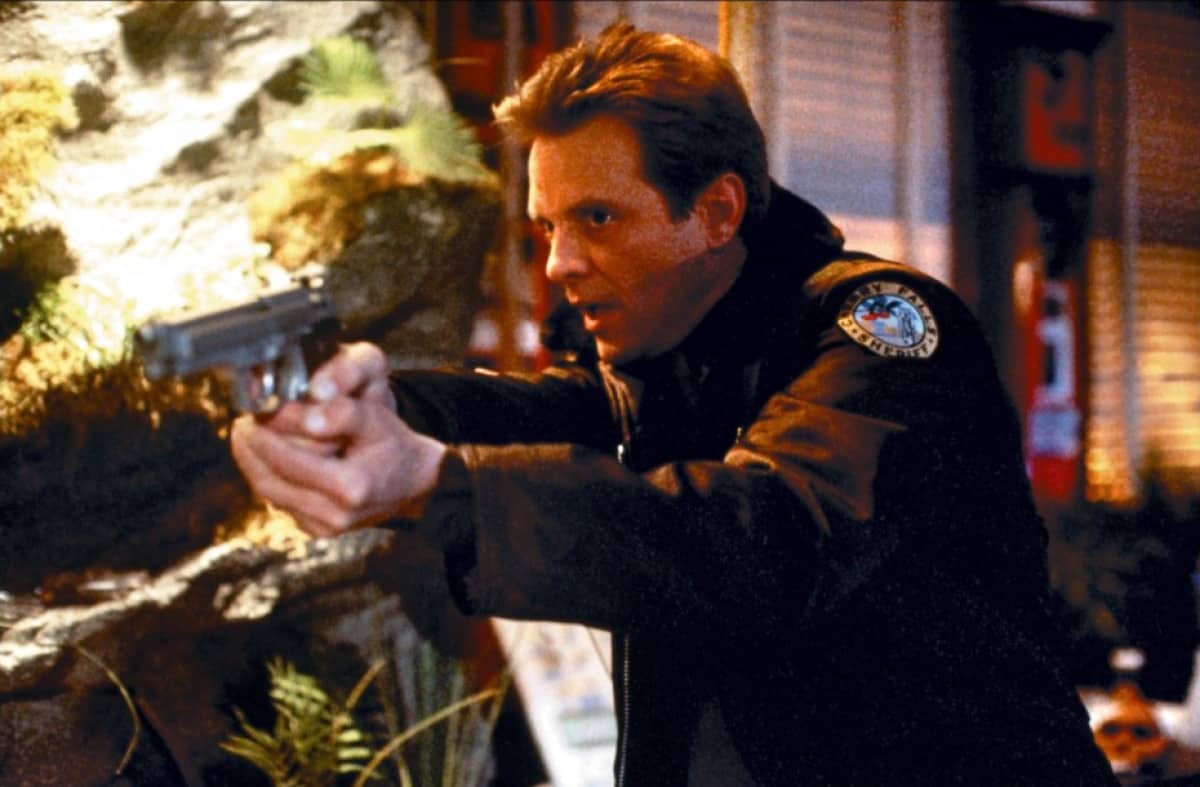 This Scream Factory release benefits from a solid 1080p, 1.85:1 video presentation. There are a few instances in which some detail gets lost, mostly in scenes awash in darkness, and the regular comment about there being little grain in the picture does apply here as well. Seeing as the film was shot on 35mm film, one would think grain should, in theory, be easier to discern. Like with some of their other releases, it is present, only that it comes off as very, very fine. Despite those little nagging issues, the video is by and large very kind to the film’s colour palette. Yellows, blacks, oranges (especially during the climactic orgy scene), and reds all look delicious, adding decent flavour to the proceedings and setting the mood nicely.

The DTS-HD Master Audio gives the movie the punch it needs, with sound effects coming in loud and clear, in particular in moments when the killer strikes his victims. As such, even though viewers rarely to get see the monster’s work, the aural experience is strong enough to suggest his dastardly deeds. Dialogue is well balanced within the rest of the track, be it during quieter moments between two characters or when things get really hectic during the final act.

Cherry Falls on blu-ray offers fans some new material to dig into, starting with an insightful commentary from director Geoffrey Wright. Wright comes off as an affable personality, although he admits in the session that there was a certain level of tension on set, some of which was of his own doing. The entire cast and crew had to wrestle with impressive time constraints, to say nothing of the fact that production fell behind schedule early on. Time has a funny way of healing old wounds, with Wright being quite complimentary about those he worked with, including Jay Mohr, whom he admits was difficult to work with at the time.

Also featured in the supplementary material portion of the disc are new interviews with screenwriter Ken Sleden and co-producer Eli Selden. The former struggles to gather his thoughts, often reverting to long series’ of ‘uhs’ before finally completing his sentences and unfortunately tends to avoid some of the juicier moments that happened on set. The latter is a bit more open to the production process, revealing that at one time none-other than David Lynch was approached to direct the project!

The new supplements are rounded out with an interview with actress Amanda Anka, who plays Deputy Mina. Her recollections are very positive, especially working with Michael Biehn.

Finally, some vintage, on-set interviews are ported from the original DVD release, which is interesting for those wanting to hear from Brittany Murphy. 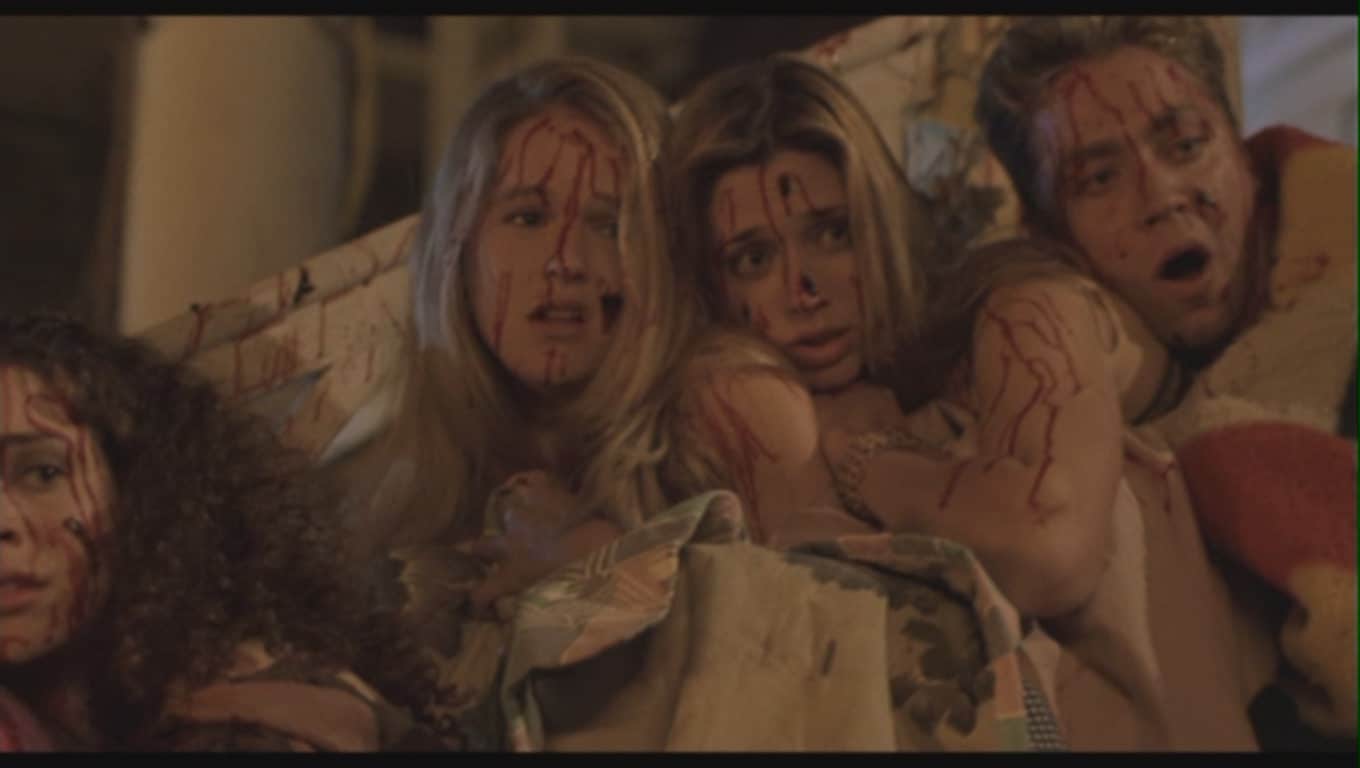 Supported by a script with some brains and a cast that’s very easy to cherish, Cherry Falls successfully distances itself from the typical serial killer fair. Much like with last week’s release, Disturbing Behavior, whose post-production history led to a neutered product, Cherry Falls was sadly not exempt with severe studio intervention, and said meddling can certainly be felt at times. Nevertheless, the film is a reasonably entertaining chiller, and the blu-ray’s supplemental offerings are not only amusing, but legitimately informative as well.