“Solitude”‘s antagonist of the week is Indigo, a blue skinned technology-based alien that hacks into the electrical system of National City, causing havoc in the form of worldwide economic collapse, a prelude to her plans to rid the world of mankind. Supergirl does some clever casting for this role with the former Supergirl of Smallville, Laura Vandervoort. Vandervoort brings the right menace and sultriness to the character, especially when spouting witty repartee to her enemies or damning humanity to herself. Vandervoort is also very agile and believable in fight scenes against Kara or a room full of soldiers. Indigo’s look is distinctive, albeit familiar, as her blue skin, red hair, and form fitted costume brings to mind the X-Men films’ Mystique, albeit with fierce, protruding nails.

The weakest aspect of this antagonist comes with her convoluted methods to execute her plans. Indigo wants to use CatCo to expose an Ashley Madison-type company called Diamonds Discretion in order to leak their data, which she would then use as a smokescreen to hide the fact that she’s trying to hitch a ride into an off-the-grid military base through one of the client’s phones. Surely, there are simpler or even more entertaining ways for her to get into the base, but they decided to go this way just so Team Supergirl could stumble upon it. When Supergirl tries to tell ripped-from-the-headlines type of stories it seldom works because they feel so obligatory, trying too hard to make the world of Supergirl seem as if it is set in the real world, when really it should embrace the fact that it just isn’t.

What the show should do is embrace more the fictional world of the source material which it has doing very well as of late. This episode pays a visit to a notable location that is cited in the very title, Superman’s very own ‘Fortress of Solitude’. It’s mentioned in passing that this is Kara’s first time visiting the Fortress, allowings the audience to be on the same page as Kara as she learns more about her heritage and this version of the Fortress. The Fortress takes its visual cues from the iconic Richard Donner Superman-era design, with the crystal shards, spacious taverns and deliberate spotlighted areas. It’s a smart choice, as it’s great to see this Supergirl be associated with that particular Superman brand. Hopefully the show decides to revisit this location again from time to time as there is possibly more to explore and reveal about Kara’s Kryptonian heritage or even to learn some more tidbits of this worlds Superman. 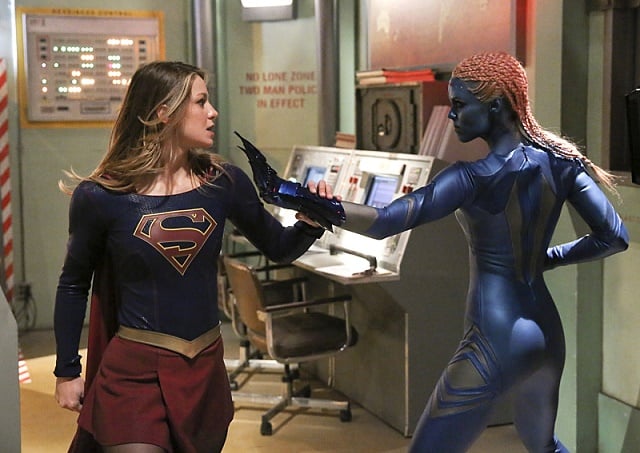 Aside from the big bad of the episode, Kara is also struggling with her apprehension with Hank Henshaw, and decides to end her relationship with DEO. The death of Astra has been affecting the way that Kara sees Hank, and in the last episode it had been taken to a head when she decided to quit. The episode title “Solitude” may call to mind the location Supergirl visits, but it also refers to how Kara decides she will handle things from now on, stating that she wants to be her “own Supergirl.” The lesson Kara learns is that she can’t do it alone and that she is better working with a team, and her team is closely tied to the DEO now. Throughout the episode Kara loses allies, first Alex and then Wynn, who gets recruited by the DEO to help stop Indigo. Dividing the team weakens all sides and it’s made clear that in order to beat Indigo they need to work together. It’s a point that is driven home when Hank repeats to Kara the familiar adage that they are “stronger together”.

The strongest beat in the episode comes with Alex’s confession to Kara that she, not Hank. killed Astra. Although, Kara had not forgiven Hank she had agreed to work with the DEO again, which could’ve allowed for the secret to continue for more episodes, but instead of that Alex decided that she had to face up to what she had done and stop all her lying in order to repair Kara’s view of Hank. Chyler Leigh’s performance of Alex’s confession is amped up with emotion and is by no means subtle, which plays extremely well against Melissa Benoist’s Kara, whose remains silent allowing her face to express all the emotions of anger, sadness, frustration, and finally understanding. When Kara chooses to hug Alex despite learning what she’s done it’s a very powerful moment and is made the more tender when she reaches out to Hank in a moment of solidarity and familial acceptance.

Another notable arc in the episode features Wynn and the development of his relationship with Siobhan Smythe, Cat Grant’s other assistant. The show quickly established in recent episodes that Siobhan is the office go-getter, and in keeping in the theme of the title, she opts to ignore the advice that Kara offers and decides to just go solo with her own plans, which turns out poorly for her. This begins a breakdown for Siobhan that is a subtle and well-performed by Italia Ricci, who does a good job at displaying the meanness of her character and is equally apt at presenting the damaged side that suffers from daddy issues. It almost seems appropriate that she would be paired with another who is known for having father woes, and so the show has brought her together with Wynn in a somewhat surprising kiss by episodes end. There really could’ve been more time take to build this romance up a little to stretch it out but to have it done this quickly gives a nice momentum that the show has something up their sleeves for Siobhan and Wynn in upcoming episodes, which will be fun to see.

The last significant event of the episode is the breakup of James Olsen and Lucy Lane. They have been building up to this for some time now and to have them finally pull the trigger is interesting, as the show seems poised to finally pair James with Kara together into a real relationship. But what does this mean for Lucy? Will she stick around to make things awkward in the office for them or will she be written off the show? Either way it seems like there is no reason to not have Kara and James together now. Only time will tell.

“Solitude” broadens the mythology and the world of the series by introducing a new character, visiting a place of note, and closing an arc of secrecy that had been tearing Team Supergirl apart with an emotional confession of truth that in the end mended fences.