For a director whose work is known to be incredibly macho and conform to genre tropes, Mann stands out amongst a lot of cinephiles as the one of the best studio filmmakers working today. His films, shot in digital or non-digital, evoke a moody imagery that glorifies his character’s emotional being yet is radiated by coolness. Last night, the BAMcinematek in New York finished its retrospective of Michael Mann. In honour of the grandstanding event (note: I live in Sydney, Australia, which is 20 hours away), I take a look at the five types of moments that define Mann’s body of work, two of which fit into each category.

“You wanna get some coffee?” 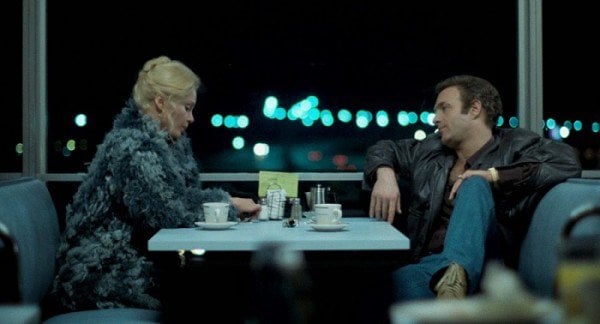 Mann develops mood not just from crafted compositions, but by distinct dialogue that depicts no more than a slice of life. It’s better illustrated in two common scenes in Thief and Heat, where we see two individuals simply chat at a cafe. These exchanges accomplish building these characters a down-to-earth personality, but it immaculately illustrates their life choices. One of them has the burden of an “ordinary life,” the other had to break the law to make ends meets.

In Thief, Frank (James Caan) brings his girlfriend Jessie (Tuesday Weld) to a diner after he became late to their first date. During this scene, Frank reveals that his position in society is quite rocky, and Caan allows him to be a tragic character as much as a stoic, no-nonsense one. The two share an emotional bond. Frank, a professional thief, tells her how he spent time in prison by forgetting about time and not having to worry about anything. He then shows her a photo collage of where he wants to retire and raise a family, and tells her that it’s only gained if he does the mob’s bidding and commits a heist. Highly existential, Mann endures the sadness of his subject, but reveals more of his lofty ambitions.

The dining scene in Heat sees Al Pacino and Robert De Niro, two acting giants in the peak of their careers, sharing the screen together for the first time. The one thing both leads have in common is that they’re really talented in professional life – Pacino’s Vincent Hanna, a veteran cop at the LAPD, and De Niro’s Neil McCauley, a career criminal who has pulled off many bank heists – but have become detached from their personal lives. What’s discussed there is McCauley lives through anonymous seclusion, while Hanna has to carry a baggage of a shaky second marriage, and a suicidal stepdaughter. It sums up Heat by taking into account many of the film’s subplots where careers interfere with their personal lives; an interrogation between two men that feels nothing more than an ordinary chat. But while they are at odds at each other, as far as the cops-criminal dichotomy goes, they don’t feel like they are, establishing an emotional connection between the two.

A Gaze of Fear and Self Doubt

A frequent motif in Mann’s films is perhaps the emptiness that exists in his characters. They’re so good at what they do, that they’ve become shut off from their personal lives, succumbing to painful loneliness. It’s often highlighted through a single composition of men gazing into blank landscapes feeling a sense of malaise. Think of the extreme close-up of Sonny Crockett’s face as he stares into the beauty of Miami’s waters in Miami Vice or the shot of McCaculey in Heat staring at the navy blue beachside of LA alone from the view of the balcony at night.

An effective example of this would be in Manhunter, where we see Will Graham (William Petersen) mimics every possible mannerism of serial killer Dollarhyde in order to understand his sociopathic psyche. After confessing to his son that he was admitted to an asylum while profiling for another case, Graham glares through a misty window; in contrast, a group of women seen socializing is reflected through his view. Prior to this, he states “I’m sorry” after a tape recording of another woman. A waitress chimes in, marking a point of his fear of insanity by studying Dollarhyde’s mind. It concludes with a close-up of ‘it’s just you and me sport’, where he becomes ready to take him on.

Though there are fewer gazes in The Insider, there’s a scene featuring Russell Crowe that pulls off the same effect. The film is an engrossing tale about corporate manipulation of the media where Crowe possesses great vulnerability as Jeff Wigand, a former employee at a tobacco company who agrees to do an interview with CBS’s 60 Minutes exposing the firm’s shady tactics. Once a sanitized interview goes on air following threats from the firm, a montage of Russell Crowe ensues. Cued to Massive Attack’s “Safe From Harm” (Perfecto Mix), he imagines being with his two children, and like with Manhunter, it strips bare all of his isolation and sinks much of his vulnerability to his lowest. But whereas Graham feels prepared, Wigand feels defeated, having already lost his family as well as his dignity.

A Shootout In The Midst Of Bystanders 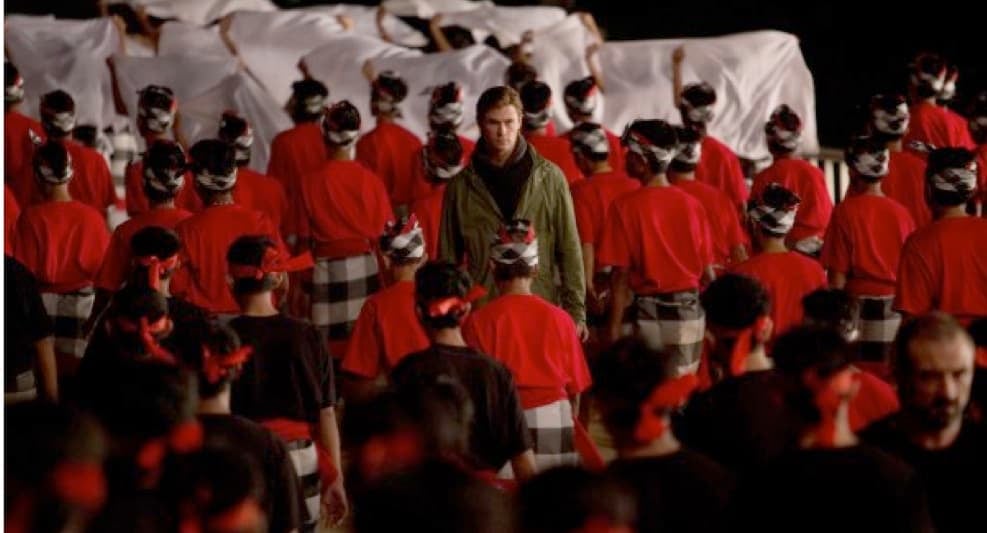 There are two types of gunplay that takes place in a Michael Mann film – one done in a wider distance (the cops vs. robbers in Heat) and those done in a narrow distance, bringing in ferocious intensity between the two sides.

In Blackhat, a climatic shootout occurs during a negotiation between Hemsworth’s Hathaway and the film’s villainous hacker in the midst of a parade of velvet red marchers, serving as the moment’s most sensational core. With each sound of a bullet, the sequence becomes overwhelmingly intense. It’s definitive of the film’s abstract nature, in that humans all exist in a grid-like world and that they have to explore danger in order to survive.

In Collateral, Mann’s first foray into digital cinema, Tom Cruise’s sociopathic hitman, Vincent, is assigned to take a hit on a Korean mobster with Jamie Foxx’s Max, a taxi driver who’s forced to assist him on his mission. The nightclub they get in becomes increasingly enclosed as soon as the LAPD comes in to take down Vincent and protect his target. The camera cuts to each individual crawling through the maze-like dancefloor with Vincent, by the end, taking him down with immaculate combat and rapid gunplay. It’s this that makes it perhaps Mann’s best display of action.

With both scenes, human life is both a value and an obstacle, and the key to both of these scenes is owed to small movement from the actors. As a bullet lets out, every bystander is forced to run, disrupting a peaceful yet fragile environment.

Pulling off a heist 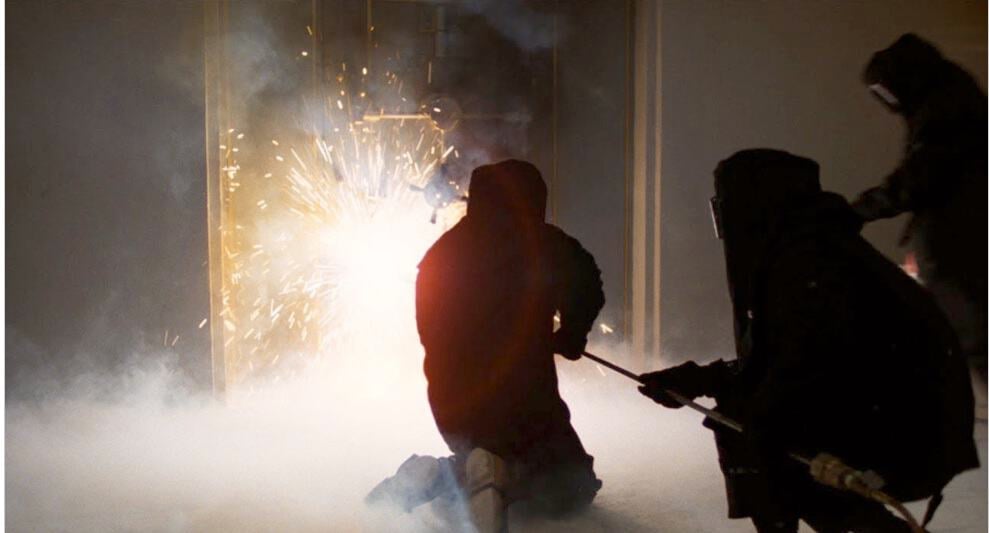 Perhaps the main appeal about Mann is his thrilling fascination with men who are methodical experts in their job, where they can execute a task with flying colors. Whether you’re a profiler who mimics their suspect’s behavior, a career criminal who can effortless pull off a heist after spending some time in prison, or even a trapper who can kill rogue warriors in one single technique of swordplay.

Coming back to Thief, two of the film’s most memorable scenes is Frank pulling off heists. First is the opening sequence of Frank cracking a blue-tinged vault, heightened by Tangerine Dream’s energetic score, bringing great attention to detail to the process. But the diamond heist is probably better, resembling that of its French influences, Le Cercle Rouge and Rififi, to which they share a lack of non-diegetic sound. Mann uses the film’s minimalism to build heart-pumping tension, but aims for maximal impact. What comes in with cracking the safe is a pyrotechnical spectacle, where sparks bursts like fireworks. 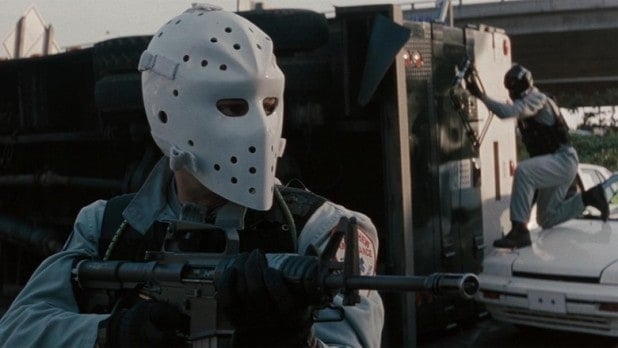 Likewise, there are two big robberies in Heat, the most famous of which is when McCauley and his group rob a bank and later exchanging bullets with cops at a further distance. The first heist, however, in which they rob an armored truck that stores bonds from a money launderer, packs more of a punch. Its setup is incredibly elaborate. An incoming large truck crashes into the vehicle, to which they take the money in Jason-like masks, arming themselves with AK-47s. Before they run off in an ambulance, one of the thieves goes rogue by shooting both guards. It establishes these characters being not just great at what they do, but by being intimidating doing it.

Falling in Love In The Rain

There are two ways Mann create connections between his characters: either through a simple and casual conversation or having them have desirous romance together. But based on these two scenes, water is involved.

There are plenty of moments in Miami Vice that are shot in a range of intimate close-ups targeting for a strong and romantic sentiment. This mostly happens once Colin Farrell gets it on with Columbian drug trader Gong Li, and being the champion for mojitos. But it’s perhaps a scene between Naomi Harris and Jamie Foxx who share a shower together that feels warm and personal, as Mann’s camerawork lingers on their skin like a microscope. In spite of Harris and Jamie Foxx’s limited screen time together, it’s easily erotic, but upon their dark black skin, it’s feels very inclusive. Foxx once sums up their scenes as “black love with the sound of jungle drums playing”.

Another similar moment is derived from The Last of The Mohicans, in which a group of tribal trappers, lead by the white Hawkeye (Daniel Day-Lewis) are enlisted to assist the British colony from the French army during the Seven Year War. He falls for the British colonel’s daughter, Cora (Madeleine Stowe). In this sequence, she and Nathaniel, along with his group, take closure to a waterfall following an ambush by the French. “You stay alive, no matter what occurs. I will find you. No matter how long it takes, no matter how far, I will find you”, Nathaniel tells Cora behind a bellowing and flashing waterfall, as he wants her to survive, regardless if he was here with her. It demonstrates more than mutual trust between the two, it’s a life promise.