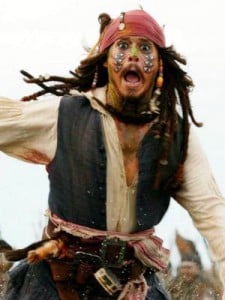 Reently, Hollywood was all abuzz when “Johnny Depp appeared at Disney’s D23 Expo in Anaheim and confirmed he would be reprising his role as Jack Sparrow in Pirates of the Caribbean: On Stranger Tides, the first film of a new Pirates of the Caribbean trilogy.”  However, the involvement of Depp is now allegedly in question; in reference to the project, he said “there’s a fissure, a crack in my enthusiasm at the moment.”

The theory is that Depp’s sudden doubts are directly related to the departure of “the head of Walt Disney Studios, Dick Cook, who Depp credits for why he works with Disney and why he became involved in the Pirates franchise.” Now, Depp has raised a different flag, saying there is a “potential deal in place” to return but that…(it) will depend on how good the script is.”

Should Johnny Depp drop out of this proposed new trilogy, Disney will lose the crux of what made the original films an occasionally fun and entertaining run of films. I felt that by the time the string of films reached a trilogy, it had become bloated and terrible. I am more interested in watching Johnny in the  long-anticipated adaptation of the Hunter S. Thompson novel Rum Diary, set for release next year.  I thought he was the highlight of the slow Michael Mann film Public Enemies.

I prefer his creative collaborations to the tired caricature that Jack Sparrow became by the third installment.  Maybe he sees that too. I think his potential change of heart could be about more than Cook’s departure.  I think an end to the Pirates saga is positive. The stars just are not aligning on this one.