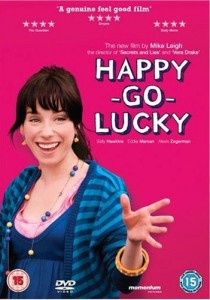 In a shift away from his usual exploration of the dark and dreary, director Mike Leigh takes a lighter look at life with Happy-Go-Lucky. Sally Hawkins is a comic revelation as the lead character Poppy, delivering a nervy, utterly captivating tour de force performance. Eddie Marsan is just as good as the mantra-spouting Scott; the complete opposite of Poppy, uptight and rigid giving their scenes together a real uncompromising bite. It is always refreshing to find a movie that leaves you smiling while at the same time making you think about what commitment to happiness really means.

listen to our review from podcast #68 Billy Elliot marks the directorial debut of the Royal Court Theatre artistic director Stephen Daldry, who draws out top performances from Jamie Bell, Julia Walters, and Gary Lewis in what is one of the most emotionally satisfying films on this list. Billy Elliot is complex and intelligent and poesesses a “feel-good” quality without becoming overly sentimental. Billy Elliot is loaded with so much ‘movie magic,’ that it left me with a tear in my eye.

Listen to our review of Billy Elliot from podcast #85 Listen to our review from podcast #27 Shooting on a limited budget and with small digital-video cameras, Boyle manages to create a film that achieves a terrifying emotional high that slasher films never realize. This riveting chiller that is more than a zombie movie – better than most post-apocalypse films and kept me involved from start to finish. The movie works first and best as an attempt to capture what’s vital and primal about horror movies. This tense, inventive thriller which deftly plays with genre conventions,  boasts a superb score, astonishing cinematography, a great cast and solid direction.

Listen to our review from podcast #22 A bright, imaginative and warm-hearted children’s fable with an impressive debut performance by Alexander Nathan Etel, and a miraculous musical score by John Murphy. Warm, funny, weighty, wholly original, and imbued with a sense of optimism about the human spirit. Millions is quite possibly one of the best christmas movies ever made. Brad Bird may be one of the few animated filmmakers working today who understands what the concept of a “family film” means. It’s something that offers material to viewers of all ages and doesn’t lose one group by catering too strongly to another. Ratatouille is an irresistible feast of comedy, imagination, intelligence and heart that is free of gratuitous pop-culture references that plague so many movies of the genre. Pixar succeeds again with Ratatouille, a stunningly animated film with endearing characters, a terrific script, great performances, sumptuous animation, a non-stop barrage of wonderful gags and one of the greatest performances of Peter O’Toole’s career. Anderson, with his first madcap foray into animation, adapts Roald Dahl’s Fantastic Mr. Fox and makes the brilliant decision of shooting the whole thing in beautifully old-fashioned stop-motion animation, while lending his usual trademarks to the children’s tale. The animation is superb and Fantastic Mr. Fox represents a prime example of what can be done with this painstaking, old-school format (the same technique used for the original King Kong and Wallace and Gromit). This stop-motion escapade is alive with texture, beautifully colored and overstuffed with ingenious visual effects and brilliant sight gags. Your eyes will never stop roaming the screen and it quickly becomes clear that Dahl’s edgy storytelling fits well with Anderson’s ever-present worldview and visual style. Fantastic Mr. Fox is a warm and charming film about family, adolescence, and adventure that nevertheless stays faithful to the spirit of the source material. In its glorious and barreling 87 minutes, Anderson has taken the gist of Dahl’s book and carefully expanded it into everything you would expect it to be. Whimsical, not quite tongue-in-cheek and very self-aware. Infused with its own brand of hyper-stylized realism Dogtooth feels so out of this world that it is quite impossible to pin down. The winner of the Prix Un Certain Regard at the 2009 Cannes Film Festival, Dogtooth is so twisted and weird that it makes the absurd comedy found in the films of Todd Solondz seem relatively lucid. Dogtooth is not for all tastes, and at many times can be unpleasant to watch. The film exposes the bizarre sexual undercurrents that exist behind a family’s life. At times the film can be extremely graphic, with pools of blood dripping on frame and at other times borderline pornography with explicit sex. It’s a labor of love from the director, a long-winded allegory wrapped within the year’s most unusual gift. Deliberately slow with a dreary pace, deadpan dialogue, and expressionless acting that may turn off some viewers. The well executed script is quite possibly one of the greatest depictions of family values gone wrong breaking new taboos in groundbreaking ways. Always unpredictable and certainly provocative, the picture is bound to raise a few questions and eyebrows. This was Julian Schnabel`s second biopic of three revolving around an artist (after Basquiat and before Diving Bell and the Butterfly). Before Night Falls is as visually arresting as one might expect from a painter – Schnabel uses images as effectively as words to advance the story, always keeping the camera moving busily but with purpose. Javier Bardem gives an undeniably dynamic lead performance and together with Schnabel they deliver a spellbinding treatment of the life of the late Cuban writer Reinaldo Arenas. David Gordon Green makes a stunning directorial debut with George Washington, a highly poetic drama that tells the story of the inhabitants of a small, impoverished southern town. A beautifully-photographed gem which fuses the lyricism of Terence Malick with Harmony Korine’s willingness to explore the landscape of the American underclass. David Gordon Green does a superb job in capturing a slice of American life in this truly original film. You either love David Lynch or your simply hate his films. So to sum up Inland Empire I will quote the Village Voice critic J. Hoberman. “It’s an experience. Either you give yourself over to it or you don’t. And if you do, don’t miss the end credits.” Writer-director Andrea Arnold delivers again with her second feature film, a quiet intense, and strikingly shot coming-of-age drama. Katie Jarvis, in her first movie appearance, commands the screen as Mia, with a natural presence that matches the unsentimental minimalism of the film.

Listen to our review from podcast #189 A great achievement in cinema-verite. Director Laurent Cantet refuses to instruct us on who’s right and who’s wrong in a movie that constantly plays against our expectations. Writer-actor François Bégaudeau who adapted his own book for the screenplay, also stars in one of the most authentic and honest films about high school students and teachers to date. Partially improvised, using a real (ex-)teacher and real school kids in pitch-perfect performances, The Class is uplifting and thought-provoking from the opening credits to  when the final bell rings. Six-degrees- of-separation has never looked as good as in this ambitious multi-plotted portrait of overlapping lives in contemporary Mexico City. Amores Perros constitutes one of the most breathtaking and impressive directing debuts in cinematic history. Brilliantly shot, superbly acted and deeply heartfelt. With Lost in Translation, Sofia Coppola made a serious bid to claim her last name for herself, with her intelligent, beautifully rendered mood piece. Bill Murray shines in one of his best performances with his trademark passive- aggressive style and Coppola’s mood-setting is pitch-perfect. Low-key, smart, direct and unique. Defines the term ’something for everyone;’ with the mix of romance, fantasy, and action that will appeal to all audiences regardless of age or sex, The hallmark of Crouching Tiger, Hidden Dragon is its standout action sequences, all of which are eye-popping and flawlessly choreographed by the great Yuen Wo-Ping (Iron Monkey, Kill Bill). One of the best adventure movies of the last decade, Crouching Tiger, Hidden Dragon is also  beautiful, poetic and moving; something that is rarely seen with these genre films. Kim Hye-Ja’s performance is absolutely magnificent as a woman who is forced to investigate the murder her son is wrongfully accused of committing. The second of three films to appear on this list by Korean director Joon-ho Bong, Mother is clever, tightly plotted and truly gripping from start to finish. Pushing beyond the limits of a conventional noir thriller, Bong Joon delivers a compelling mystery thriller and a dark psychological study of a mother and son relationship. They say there is no greater love than that between a mother and her child and Bong Joon takes that idea and flies with it.